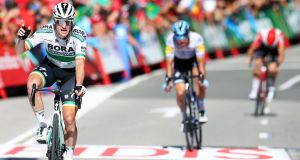 Irish rider Sam Bennett of the Bora hansgrohe team reacts crosses the finish line to win the 14th stage of the Vuelta a Espana. Photograph: EPA

Sam Bennett took a dominant victory on stage 14 of the Vuelta a España on Saturday, winning the uphill sprint into Oviedo.

The Irish road race champion clocked up what was his second stage win of the race and 13th victory of the season, opening up inside the final kilometre in pursuit of Tosh van der Sande (Lotto Soudal), blasting past the Belgian and holding off the Argentinian sprinter Maximiliano Richeze (Deceuninck – Quick Step).

Bennett’s Bora-hansgrohe team led the peloton in the closing stages before UAE Team Emirates took over with just a kilometre to go. A massive crash took down many riders but Bennett and several other sprinters were ahead of the carnage and thus unaffected.

The Irish road race champion then made things look easy, with his surge opening up a considerable gap. Despite coasting to the line, he finished about four bike lengths clear of Richeze. Van der Sande was two seconds back, while the next riders were five seconds in arrears.

Several important riders came down in the finale, including world champion Alejandro Valverde (Movistar Team) and Tadej Pogacar (UAE Team Emirates), who started the stage second and third overall. Also delayed was race leader Primoz Roglic (Team Jumbo-Visma). However the UCI’s rules governing the final three kilometres meant that they were all given the same time.

Roglic continues to lead overall, two minutes 25 seconds ahead of Valverde and three minutes one second ahead of Pogacar.

Bennett praised his Bora-hansgrohe teammates. “The team did a fantastic job in the roundabouts and in the final. They worked hard all day. They put me in a good place in the final. We started slowing down a lot on the steepest part. One guy (Van der Sande) came past with speed. I didn’t want to wait too long.

“Richeze went. I was afraid the other guy was going too fast so I just went past. I took a run at the two of them. I had good speed at the end. I looked with 300 metres to go and I thought, ‘ah, it is too far (to the line) but I had enough power.”

Bennett admitted he was afraid to celebrate at the line, not knowing for sure if the day’s breakaway was still out front. “I didn’t know they were caught. I am just delighted.

“I am happy now, I reached my target for this season (three wins). But hopefully there is another one or two [stage victories] in the bag.”

He is now up two places to fifth in the points classification. The next possible sprint finish is on stage 17 in Guadalajara.