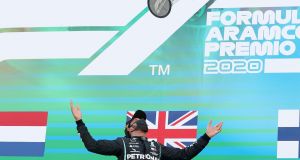 Lewis Hamilton (Mercedes) celebrates on the podium after winning the Spanish Grand Prix at the Circuit de Catalunya in Montmelo near Barcelona. Photograph: Albert Gea/AFP/Getty

Lewis Hamilton has described competing in Formula One under coronavirus restrictions as a unique challenge. The paddock has had to adapt to new protocols. These have been successful but the limitations on social contact have exacerbated what Hamilton called a “lonely journey”.

Hamilton won the Spanish Grand Prix on Sunday with a dominant run from pole to flag, finishing 24 seconds in front of the Red Bull of Max Verstappen. Hamilton leads the world championship by 37 points from the Dutch driver.

Spain was the sixth race this season, concluding the second triple header of meetings during which drivers remained in social bubbles. Ordinarily Hamilton would travel between races, visit family and pursue his interests in fashion and music.

It is a work/life balance the Mercedes team principal, Toto Wolf, has highlighted as vital for his driver to deliver such a high level of performance. However, because of coronavirus Hamilton has curtailed his lifestyle and for all the races he has been staying in a motorhome at circuits to minimise any risk of infection.

“The journey of an F1 driver in the fight for a championship can often feel like a lonely journey,” he said. “That is magnified this year with having to limit the people in your bubble and moving around. In the past the travelling and other things I found positive, being around friends to find the perfect balance. This year is much harder to implement the other things that keep the balance. This year is a real challenge and test mentally.”

The season is set to run to at least 15 races with a full calendar expected to be announced next week, when the triple-header of meetings at Spa, Monza and Mugello commences. When they conclude F1 will have completed nine races in 11 weeks.

“I am not seeing my family but I am focused and as driven as ever,” Hamilton said. “It is a marathon not a sprint so I am keeping my head down and know I will enjoy myself a little bit more at the end of the year and can hopefully be with family.”

Mercedes have won five of the six races but Hamilton’s teammate, Valtteri Bottas, has only one victory, at the season-opener in Austria. With Mercedes so dominant, Bottas was best placed to challenge Hamilton but he was only third in Spain and third at the previous race at Silverstone. He is 43 points behind Hamilton and has admitted the championship may already be out of reach.

“I have no clue actually what the points’ difference is, but it’s way too big,” he said. “I can see again the championship drifting away. Apart from the first race, it’s been pretty bad. There’s not been a weekend that has gone smoothly and without issue, apart from the first one, so a pretty bad season so far. Obviously, that’s disappointing.”

MotoGP’s Franco Morbidelli, who was involved in a crash at the Austrian Grand Prix on Sunday, has demanded that riders be held accountable for their actions despite the accident being ruled a racing incident.

Morbidelli collided with the rear of Johann Zarco’s Ducati and both riders fortunately emerged unhurt. The accident also almost took out Valentino Rossi and Maverick Viñales.

“I think that every time both riders crash it is a common habit to call it a racing incident and situation solved,” Morbidelli wrote on Twitter. “But this ‘racing incident’ happened at 310km/h. Great luck we’re in one piece, but someone needs to pay [for] the mistake.”

Zarco appeared to move off line while braking to defend against Morbidelli and the latter clearly believes he should have faced sanction.

“Braking like this at 300km/h is really having little love for yourself and those you are racing with,” he told Sky Italy.