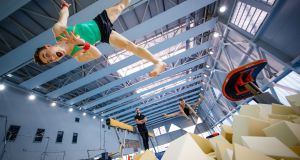 Gymnastic club membership has grown by 27,000 in the last decade, up to 36,000. Photograph: James Crombie/Inpho

Not all sporting bodies are stressed out about how or when their league and championship can be run off in the wake of Covid-19. Others have more pressing challenges to face.

Gymnastics might be considered a minority sport in Ireland but it is one of the most in demand, and club membership has been soaring – up 27,000 in the last decade, to 36,000. Some have a waiting list to join, others such as the Douglas club in Cork boasting 3,000 members, one of the largest of any sport in the country.

The appeal is growing too, more parents making it the number one activity for their children, and while 85 per cent of those involved are female (compared to the worldwide average of 60 per cent) the success of Rhys McClenaghan is putting the sport on the map in other ways too.

Leading the drive on this increased participation is Gymnastics Ireland chief executive Ciarán Gallagher, who competed internationally for Northern Ireland, and later developed the purpose-built facility for his own club in Lisburn. Now with all clubs closed since the national lockdown was introduced on March 15th, Gallagher’s primary day-to-day activity is leading the operation to ensure most clubs can survive whatever the outcome of Covid-19 might be.

There is a clear and present danger. Without any major TV rights or global-brand sponsorship as back-up, the sport is reliant on club membership to survive, and the nature of the business is almost all non-voluntary. Unless some activity returns by the end of the year some clubs may not get to reopen at all.

“Unlike most of the other governing bodies of Olympic sports, we would be 75 per cent self-funded, via club membership, commercial and event revenue, etc,” says Gallagher. “And only 25 per cent of our funding is actually public funding and sponsorship, and that’s targeted to high-performance, women in sport, disability in sport, things like that.

“So gymnastics clubs are now small businesses, some the sole-trader operations turning over up to €50k a year, others having €1-€1.5 million in turnover, employing up to 40 staff, between full-time, part-time and casual work.

“The business model is based around recreation and participation gymnastics, which basically funds the majority of everything else. So clubs on the grounds have be hit the same as any other small business, essentially. Just as with any other business they have monthly costs, from commercial rents/mortgages, through to staffing and maintenance costs, and almost all this is funded via term-fees they charge to each individual member.

“So initially there was some real worry and panic about how things would shake up, before the Government introduced the wage subsidies. That meant some of the clubs were a little more secure, with small reserves.”

“But the last three weeks have never been busier, trying to deal with the club networks, which are essentially a small business. Gymnastics is not a voluntary sport in Ireland. We do have volunteers, but that’s only really around national events, the judges and people like that. Coaches and gym-managers would all be paid.

“So our current focus has been supporting the clubs in whatever way we can, because essentially they are Gymnastics Ireland. We’ve been lobbying the Government too, trying to get some idea of how social distancing might work in the year end, because that’s key for us all. The gymnastic club is about groups of people in an indoor facility, that’s how they make their money.

“We’ve retained 15 core staff members, trying to budget for the end of the year, and support the clubs in whatever way we can. It’s been very challenging, worrying, but I am hopeful that as long as we can return to some level of business by the end of the year, we have the solid business model to get through it, and to bounce back.”

Gallagher is also a member of the executive committee of the Olympic Federation of Ireland, and working with Sport Ireland and the Federation of Irish Sports in dealing with that current lack of business.

“We’ve looked at three scenarios, an A, B and C, or best, middle, and worst. Our best scenario is no club activity until the end of June, but from September, to get back and start afresh there, from a membership point of view. Also for our high-performance programme, we would like to see some phased access to the Sport Ireland campus.

“It will take a considerable swipe off us, our turnover will have dropped at least a third in that scenario. We’ve already had to cancel all events until June, and some of the contracts of the people working on then. In the worst-case scenario, we can make it to the end of the year, with no activity, have reserve accounts for that, but it would make 2021 a real concern.

“Sport Ireland knows how difficult it is, but it would be nice to have some sort of traffic light system, in terms of distancing and contact protocols. We’re not a contact sport like rugby, gymnasts do work in close proximity, but the sport has a wide scope of activities that can be carried out, and is also quite adaptable, and creative. We’re just looking for some sort of indication from the Government over the next couple of weeks as to how quickly life can return to normal, whatever that new normal might look like.

“Sport Ireland have also asked for a brief from every sport, and how they might be able to assist us. Everybody wants to ensure the NGB’s are still there when all this is over, and that the clubs are still there. Our big concern is around clubs that are renting.

“We’re also asking anyone whose job has not been affected by the Covid-19 crisis to continue to pay term fees if they are able to do so, and also calling on any supporters of who may be in a position to support their local gymnastics club to make donations if at all possible.”

“Only 10 or 15 per cent of clubs have reserves beyond a couple of months. The clubs that have not collected any cash flow, keeping the facility afloat is the challenge. If there’s no business in some form come the summer, the concern then becomes greater.

“Everybody is confident that have a strong sport sector in Ireland, even if you’re not one of the top three sports, there are good business models around the country. And as long as we have some guidance, get some more information, we can start to plan around it.”