‘If you’d given me that before the tournament started, I would have snapped your hand off’ 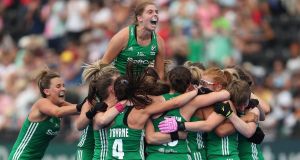 Ireland won through to the quarter-finals of the Women’s World Cup with a game to spare on Thursday and Irish coach Graham Shaw believes the attitude his squad have taken into the tournament can help them go even deeper.

Anna O’Flanagan’s 13th-minute goal from a penalty corner and some brilliant backs-to-the wall defending in the second half helped the Green Machine to a 1-0 win over India at the Lee Valley Hockey Centre in London to secure Pool B and a direct spot in the quarter-finals.

And now Ireland will take on England in front of a 10,000 sell-out crowd on Sunday night (7pm), with the hosts looking for a result to make it through to the cross-over series of games played out between the sides finishing second and third in each of the four pools.

Ireland will have no pressure on them going into the final round of pool games and Shaw will continue telling his players to enjoy the experience.

“We’ll continue to enjoy it but obviously now the pressure is off a little bit,” said Shaw. “You know straight through to the quarter-final, if you’d given me that before the tournament started, I would have snapped your hand off. Yeah, we can go in relaxed and the great thing is, as I said, now we can enjoy that atmosphere even more than we have been enjoying it so far.”

England have failed to fire in front of enthusiastic home crowds at the 2016 Olympic Games hockey venue, drawing 1-1 with the USA on Wednesday night, the same scoreline as their opening game against India.

What a performance from @irishhockey 🇮🇪

Despite having already made it to the last eight, Shaw knows his players will be looking to put in a huge performance on Sunday.

“We’ve been looking forward to this game since the draw was done and we can’t wait to get out there and show people what we can do,” said Shaw.

“That’s what we’re here for. To be honest when we got England in the group we were absolutely over the moon. We understand and respect that they’re an absolute quality side and they’re going to bring a different challenge again to what India do. To play England in England in a World Cup straight off the back of [Britain’s] Olympic success is a dream come through for us. We can’t wait to come out here and a full crowd on Sunday.”

Shaw doesn’t expect any change in attitude from his side in preparation for the game despite having already qualified for a quarter-final, which will take place next Thursday, with an 8.15pm start.

“I think this tournament’s probably shown anything can happen, they’re one-off games and we see one-off games as 50-50, that’s the way it is. You can go in sometimes as a massive favourite and you can dominate games and still lose a game so we’re just going to take every game as it comes, we’re just going to prepare exactly how we prepared, stick to the process, continue to enjoy the tournament and see where it gets us.”

Ireland goalscoring hero O’Flanagan praised her team-mates after they soaked up a huge amount of pressure from India in the second half.

“Absolutely speechless to be honest, we thought we could come out here and get a result but we had to dig a lot deeper,” said O’Flanagan. “The Indians put on a great show, again our defence was rock solid, we got an early goal and we just dug deep and defended all the way.”

Goalkeeper Ayeisha McFerran, who was outstanding in the game and added to her growing international reputation as a top shot-stopper, was another enjoying the celebrations.

“For our first World Cup in 16 years and to make the quarter-finals with a game in hand, it’s not something every Irish team gets to say they’ve done. So to be in this position, it’s a great feeling,” said McFerran.