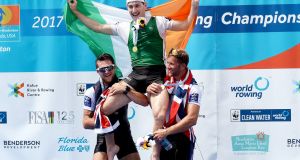 Paul O’Donovan is lifted into the air after winning gold in the men’s singles scull at the World Rowing Championships in Florida. Photo: Detlev Seyb/Inpho 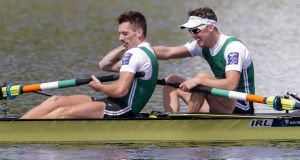 But if the Lucerne haul topped the Florida one in terms of numbers of golds won, Irish international rowing is in a better place now.

The golds in 2001 and in 2017 came in non-Olympic events. But Ireland has a much stronger claim on Olympic events. And not just because we took our first Olympic medal at the 2016 Games, through Paul O’Donovan and Gary O’Donovan, who could not compete in Florida.

There were five Irish crews in action on Friday, three of them in Olympic events. Sanita Puspure powered into the A Final of the women’s single sculls, and the new Ireland men’s pair contested the C Final, taking 16th overall. On Saturday, the new women’s pair will contest a B final, with strong hopes of placing in the top 10.

The big lesson Ireland learned in the run up to Rio (a big contribution of the last HPD, Morten Espersen) was to plan well in advance: the two pairs are just starting out on the road to Tokyo, but there will be just one more Championships before 2019, when Ireland crews can qualify boats for the 2020 Games.

Puspure is already a strong performer in one of the top women’s events. She is 35, but heavyweight single scullers are a little like heavyweight boxers: their 30s and beyond can be very productive.

Paul O’Donovan, of course, had never planned to be in Florida as a lightweight single sculler. The Olympic silver won by himself and elder brother Gary hugely boosted the interest in the sport here. Their run faltered a little early in the 2017 season, but they got back on track: they silver at the European Championships; silver, bronze and a fourth place at the European Championships.

In fact, setting aside that an Olympic medal which made 2016 historic, the 2017 season is possibly the greatest ever for Irish rowing.

Irish crews, led by the all-conquering lightweight pair of Mark O’Donovan and Shane O’Driscoll, took medals at every major regatta – all three World Cups, the European Championships and now the World Championships.

At the World Under-23 Championships Ireland took bronze medals in both the lightweight men’s pair and lightweight quadruple.

At junior level (under-18) there have also been successes: we took a silver medal at the European Junior Championships and five gold medals at the Coupe de la Jeunesse, a European junior tournament.

Another encouraging sign was the return to action of Rio Olympian Claire Lambe, who will be available for the 2018 season.

The challenges the sport faces are mostly ones of a growing force. The financing by the Irish Sports Council has not matched the rate of growth. And the big upsurge in numbers of young people turning up at clubs looking to row has not always been easy to deal with – not everybody can coach. On the positive side, there is the innovative Get Going Get Rowing programme, which has brought rowing to schools which previously had no history of it.

Even non-rowers know that there is one club which has managed the trick of continuous productivity in both domestic and international rowing. Skibbereen is the pinnacle. But coach Dominic Casey is now a national coach. He says he is open to all comers: if they are prepared to work and work and work.

The imbalance of lightweights and heavyweights at the top level will test the programme in years to come. The International Olympic Committee now accepts just two lightweight crews: women’s and men’s lightweight doubles. Yet some of the strongest Irish rowers, both mature and in the younger ranks, are lightweights. Incoming high performance director Antonio Maurogiovanni hopes to take the magic the lightweights have created and spread it to their heavier team-mates.

There are some encouraging signs. Monika Dukarska, who will defend her World Coastal Rowing title in October, self-funded herself as a single sculler to World Cup regattas. She could not match Puspure, but she showed that she would be a good addition to the programme if she buys in for the season ahead.

In two week’s time one of most joyful of Irish rowing occasions, the Irish Open, brings every prospective international, from the O’Donovans down to ambitious youngsters, together. It should be quite an occasion.

Another golden day for Irish rowing.