The Irish Times view on Covid-19 in the developing world: a time for global solidarity 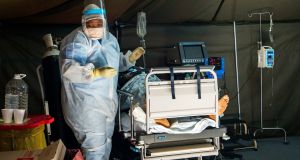 The first global wave of the Covid-19 pandemic spread from China to east Asia and from there to Europe and the United States. It followed paths of globalisation and connectivity along the air routes linking these regions. From there it is now spreading most intensively in middle-income countries like Brazil, Mexico, South Africa, Russia, Turkey and India. The poorest countries in Africa and the Middle East are threatened too. They all urgently need help, based on the cardinal principle that all humanity remains at risk so long as its most vulnerable members are unprotected.

The richest and most developed states and peoples, preoccupied by their own exposure to the pandemic and the associated recession, have been paying little attention to global solidarity. They need to focus on it in their own prudential interests. The World Bank, the International Monetary Fund and the World Health Authority warn the global spread of the disease is much more likely and lethal if this central reality is overlooked. This weekend G20 finance ministers made some progress towards essential debt relief measures. That can only be the beginning of the great mutual effort required.

It is surely time for the United Nations to mobilise support for universal action on the availability of drugs, equipment and expertise for those who most need them

The scale of the task is illustrated by stark contrasting facts of global political economy and inequality. European Union leaders spent the weekend arguing over how to spend a €750 billion special fund to protect its members’ societies and economies from the pandemic. The African Union’s fund to deal with Covid 19 comes to $70 million. African states struggle to meet debt repayments which anyway make efforts to fund hospitals, ventilators and personal protection equipment adequately difficult indeed. Ten African Union members have no ventilators to deal with the disease. There, and in India, most deaths are at home and unreported.

The pandemic presents all states with difficult choices between health and economic priorities, but for the poorest ones such decisions can rapidly become existential. Progress made over the last decade to realise the UN’s agreed sustainable development goals is threatened by the diversion of resources from education and healthcare, including from efforts to counter other diseases like malaria and HIV-Aids in affected states. The collapse of remittance payments and tourism revenues hits budgets, making them all the more incapable of meeting steep debt repayments.

This is truly a global crisis requiring a comprehensive worldwide response. At a time when international organisations are under such pressure it is surely time for the United Nations to mobilise support for universal action on the availability of drugs, equipment and expertise for those who most need them. As an incoming member of the UN Security Council Ireland should take up this challenge vocally on the international stage.

1 Coronavirus: Non-essential travel from US set to be banned within days
2 Covid-19 incidence in the Republic set to surpass that of UK
3 Irish in Australia: ‘We are in for a few hard years’
4 ‘Our hearts are broken’ – implications of fresh lockdown sink in
5 Dear Roe, dear Trish, dear John: Your thorniest sex, relationship and parenting problems
Real news has value SUBSCRIBE