Foxhall Parker Keene: The man who mastered every sport, lived like a king and died penniless 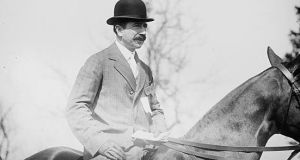 Foxhall Parker Keene owned horses having been a star jockey and polo player.

Foxhall Parker Keene was attempting to bound a stream in Meath on a January morning in 1892 when he was thrown by his horse and knocked unconscious. Bloodied but unbowed, he rose from his bed two days later to attend Fairyhouse. There, he was stooping to pluck a flower for his buttonhole when he started to haemorrhage and collapsed. News of his parlous condition quickly crossed the Atlantic where the New York papers were aghast about the potential demise of “the best gentleman jockey that this country ever knew”, somebody they regarded as “one of God’s noblemen”.

“I very nearly passed in my chips,’ said Keene. “It took all the doctors in Ireland to save me.”

A brush with death in Dunshaughlin was one of umpteen close calls during a sporting career like no other. As a precocious teen, he became America’s champion jockey over jumps, one season winning 79 out of 101 races. At Harvard, he would have been the starting quarterback only for a kidney rupture. He finished 31st at golf’s US Open in 1897 and made the quarters and the semi-finals of its tennis equivalent even though he never took the game that seriously. At the 1900 Olympic Games, he won team gold in polo and for a time was thought to be the finest player in the world.

“I have participated in nearly all the sports that men have invented to harden their bodies and temper their spirits,” said Keene. “In each of them I found pleasure and an incalculable profit to the soul.”

His father, James R Keene, a native of England, initially made a fortune in the Nevada silver mines, then won and lost huge sums in the stock market. Always remaining viable enough to underwrite his son’s sporting ambitions, he once staked $100,000, inviting challengers willing to take on and defeat his beloved Foxie in any of 10 different sports. The press loved the audacity of the gambit but nobody dared take the bet. Against Foxhall? The boy wonder jockey. The polo maven. The man who discovered he was a competitive golfer by accident. As if.

When not competing, he hunted with a young Teddy Roosevelt, was a regular at Lily Langtry’s on 23rd Street in Manhattan (where once, rather embarrassingly, he bumped into his father in the corridors), and counted moguls like Willie Vanderbilt and William Randolph Hearst as close friends. During lengthy sojourns in England, fox-hunting in Leicestershire was a particular lure, he usually hung with the fifth Earl of Lonsdale (of boxing belt fame). A pair of sportsmen of a certain type. Of that Gilded Age.

“No one has ever seen him smile and he is as correct, punctilious and precise in his deportment as any man in the world,” wrote the Brooklyn Daily Eagle. “He is a bundle of wiry muscles and has no comprehension of the word fear.”

Like so many other scions with more money than sense, Keene was drawn to the pioneering days of automobile racing. In 1901, he spent $14,000 (nearly half a million in today’s money) on a Mors sports car for the Paris-Berlin race. Two years later, driving a Mercedes in the Gordon Bennett Cup on a loop that trailed through Kildare, Carlow and Laois, he realized there was a crack in the axel but kept going for 100 more miles anyway.

“It was as much like sitting on a box of dynamite as anything I’ve ever tried,” said Keene. “But it was a pity I had to withdraw as really I had not begun to let myself out.”

After a head-on collision with a pole during the Vanderbilt Cup races around Long Island, he joked that he owned a third of the telegraph company it belonged to. Just up the road from the scene of that accident, he threw lavish parties for 500 society guests at his mansion “Rosemary Hall” and is credited by some with inventing the dish “Chicken a la King”. Here was a life that one minute seemed ripped from The Great Gatsby, the next resembled an out-take from Jeeves and Wooster.

“Madame,” he once quipped to the formidable and controversial Lady Astor in England, “I make it a rule never to disagree with a woman who was once beautiful.”

Through Castleton Stud in Kentucky (later purchased by Ireland’s Tony Ryan), he owned or part-owned horses that won the Belmont Stakes, the Preakness and the Epsom Oaks. To improve American hunting, he spent hugely importing packs of hunting hounds from England. Eventually, his louche lifestyle caught up him when he made ill-advised investments and his father wrote him out of his will. Gaining a new notoriety for unpaid bills (stiffing a mechanic who fixed his Rolls Royce), his marriage failed, and, in 1912, the Waldorf-Astoria sued for an outstanding tab of $7,000.

By the time he fetched up at his sister’s estate in Ayer’s Cliff, Canada in the 1930s, he was carrying a single suitcase that contained all he owned in the world. The thoroughbreds were gone. The fast cars and the mansion too. Broke and alone, there was nothing left but to write a rollicking memoir called Full Tilt.

“My strength and skill and even the fortune that allowed me to live so royally are spent,” he wrote. “But if I had to do it all again, I would follow exactly the same way. It was a life of pure delight.”

Last paragraph of an epic.

1 Chelsea talk the talk but still struggling to walk the walk
2 Game Changers: Gary O’Toole took a stand when others turned their heads
3 Racing regulator happy with screening protocols despite high-profile breaches
4 Alain Rolland to step down from World Rugby position
5 Georgia and Fiji in line to join Six Nations sides in eight-team tournament
Real news has value SUBSCRIBE