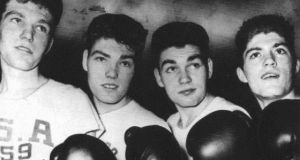 The Fighting O’Sheas - Brian, Rory, Tom and Mike - lived a life that was one-part West Side Story, two-parts The Harder They Fall.

A Sunday night like so many others, Tom O’Shea at the wheel of a ramshackle van full of young ’uns heading back to Chicago from a boxing tournament in some remote corner of the mid-west. The fighters were complaining their bellies were rumbling so he stopped at a chicken stand in a black neighbourhood. Nine African-American contenders and their middle-aged white trainer spilled into the joint and ordered the house special. Except not every meal turned up.

“We need one more over here,” shouted Bernard Lawrence.

“We don’t serve his kind in here,” said the owner.

The chicken was served.

There was a time in the badlands of Chicago when a kid in bother could wheedle his way out of a tight spot with a gang by just dropping the name Tom O’Shea and his Matadors Boxing Club. That was the weight he carried. High school English teacher by trade, trainer by vocation, yet so much more than both those things. His passing during the pandemic, at 80, was mourned in all corners of his adopted city where generations of fistic prospects passed through his hands. Some made it to the Olympics, others, like Jesus Chavez, sampled professional glory. All were bettered by the experience.

In another time, another place, his father Dixie brought him and his brothers from Rathdrum Road in Crumlin across to Arbour Hill to train under Mick Coffey in post-war Dublin. A hot-house education supplemented by nights selling programmes or hopping the stiles to see fights at the National Stadium. Then, in 1953, the boys kissed goodbye to Grandmother Brennan in her shop on York Street, sailed from Cobh to New York, and eventually reunited with their father who’d already settled in Toronto.

Soon, Tom was spending weekends barnstorming the Canadian interior in a station wagon full of fighters, earning $20 for whaling on his younger brother Brian on the undercard of promotions in hick towns. Good money. Great experience. When their peripatetic father then dragged the family south to Chicago, the two brothers and two more, Rory and Michael, walked into a Catholic Youth Organization gym and fell under the spell of Tony Zale, the former middleweight champion forever billed as “the toughest piece of steel to come out of Gary, Indiana”.

Their new trainer, their second father, in an era when 20,000 used to shoehorn into Chicago Stadium to watch the Golden Gloves, Zale had the Dubliners winning titles and earning the sobriquet “The Fighting O’Sheas”. Their mother Josephine hated the description but loved the time her sons brought home a mannerly young teen sensation called Cassius Clay for tea. The company they kept.

Every Saturday afternoon, the brothers swapped gloves for sharp suits and did the jitterbug on a television show called Bandstand Matinee. Having inherited the dancing genes from their parents (legends at the Four Provinces and Metropole Ballrooms in Dublin), their burgeoning popularity wasn’t without its downside. Between column inches for boxing, cameos on the small screen, and Tom winning dance contests all over Chicagoland, they fell foul of a gang called the Taylor Street Dukes. They settled that beef with a massive fracas at a club called Da Vinci Manor because the life they lived was one-part West Side Story, two-parts The Harder They Fall.

Having started out as a plasterer, like his father and brothers, Tom went to college at night to study English literature and his first teaching gig was at Martin Luther King High School on the southside. A tough assignment at least until he challenged a mouthy behemoth from the gridiron team to fight him in the basement under boxing rules. Once that lesson was swiftly administered, he converted the space into a gym, using equipment donated by the likes of Angelo Dundee, and started to carve out a legacy.

“These were kids who might have been sleeping in cars because of problems at home, no positive role models at all,” said O’Shea. “They were the kids who everyone thought were just Kleenex people, disposable.”

His next gym was in the notorious Cabrini-Green project where one minute he was quoting his beloved Ernest Hemingway on bull-fighting and the nature of courage, the next, unspooling yarns about witnessing a young Clay’s work ethic.

Prodigies were lost to the streets and to prison, and there were too many premature funerals but he always sang a redemption song. When Nate Jones fell in with the Cobra Stones and ended up inside, O’Shea wrote to assure him he still had a future, finishing each letter with, “Stay off the ropes and out of the corners”. Jones came back and won Olympic bronze in Atlanta with the Irishman in his corner.

“These kids with no big brothers, no fathers that stuck around, put them in a ring and suddenly a man dressed in white is telling them to break, hold it, and not to hit below the belt,” said O’Shea. “An audience is watching and they are abiding by the rules and listening for a bell. Then they’ve got to shake hands with this motherf***er who just beat them up. They’ve learned something. They’ve learned that we have rules in society. That’s why little old ladies can walk down the street safely. Better than anything else, boxing teaches a nobility that only men know.”

The creed of the matador. The Fighting O’Shea.