America at Large: When ‘the nicest killer you could ever meet’ ran boxing 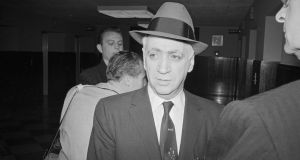 The czar of boxing did not have an office. Frankie Carbo preferred to conduct business at his favorite table in the Garden Cafeteria just across Eighth Avenue from Madison Square Garden. Promoters, managers, trainers and fighters made daily pilgrimage there to genuflect before this grey-haired, mild-mannered, gentleman as he sipped his coffee. If some looked excessively nervous and jittery about a prospective audience with the pugilist pontiff, it may have been because they knew his reputation, how he made his bones decades earlier as a notorious hitman for Murder Inc.

Rumours abounded that Carbo was the triggerman who offed Bugsy Siegel as he sat on a couch in a Beverley Hills mansion. There were allegations that he riddled two of Waxey Gordon’s beer-runners with bullets during a bootlegging feud in New Jersey. And scurrilous whispers he somehow arranged for a stoolpigeon called “Kid Twist” Reles to fall from an upper floor of the Half Moon Hotel on Coney Island while under police protection. Newspapers dubbed the gangster turned government witness “the canary that sang but could not fly”.

So much gangland scuttlebutt, so many assassinations, the FBI file about “Jimmy the Wop”, “The Southern Salesman”, “Mr. Gray”, “Dago Frank” and “The Uncle” (a mere sample of his aliases) ran to half a million pages. A street tough from the Lower East Side who did a year in Sing Sing for shooting a recalcitrant cab driver unwilling to pay his protection dues, Carbo eventually graduated to more lucrative rackets, maturing into a dapper charmer that one cop reckoned was “the nicest killer you could ever meet”. Strange way to describe somebody who arranged for many rivals to be dropped into lime pits.

A rather menacing calling card, it came in handy when he segued into boxing after the end of prohibition in the 1930s. Making a deal for a fight was always easier when everybody around the table knew the folklore about him. Like the time a promoter visited Carbo’s cell during a brief stretch at Union County Jail in New Jersey, and found him receiving a manicure while a waiter from the best restaurant in Newark was setting the table to serve him lunch. The type of bravura performance that resounded through every gym and gin mill, each fresh telling accentuating his legend.

When he got his claws into boxing through Mike Jacobs at Madison Square Garden, Carbo deployed the equally sociopathic Blinky Palermo (so-called because he couldn’t look people in the eye when shooting them) as his consiglieri. A fearsome duo capable of delivering violence beyond any punishment meted out inside the ropes, Carbo ended up controlling the fight game from behind the curtain of outfits like the International Boxing Club cartel for decades. Where better to launder all the dirty money garnered from various other hustles than a sport then the most box office in America?

“Some fights were fixed, as were some judges,” wrote Jerry Izenberg in “Once There Were Giants”. “Some fights were spectacular because Carbo owned both fighters; he knew their styles and wanted to set up a match he knew he couldn’t lose. The Republic of Carbo, the International Boxing Club (in this case, synonymous with Madison Square Garden), and affiliated subjects never had cause to blink. It made money; cashed couldn’t lose bets, and owned titles, fighters and judges.”

His most brazen boondoggle was when he arranged for Jake LaMotta to take a dive against Blackjack Billy Fox, his record padded with phantom victories, at the Garden in 1947. Part of a Carbo betting coup, LaMotta had to pay $20,000 for the privilege of losing and a promised later shot at the middleweight title. A fix so glaringly obvious that the crowd booed lustily as the vastly superior Italian-American obviously pulled punches before being knocked-out, as previously agreed, in the fourth. Fox, like so many other fighters controlled by the mobsters, ended up homeless and penniless. Chewed up, spat out.

Carbo’s nefarious carry-on was such an open secret that a New York district attorney described him as, “the most corrupt, corrosive and degenerating influence on the sport of boxing”. Five times they pinned murder charges on him, five times he walked (crucial witnesses had a habit of disappearing), but in the end, boxing proved his undoing. Jackie Leonard refused to give up a half-share of the promotional rights to Don Jordan after he became welterweight champion in 1958, and when Frankie and Blinky started to mutter the usual execrable threats, the authorities were listening in on the phone. The jig was up.

By 1960, Carbo was behind bars, yet still supposedly controlling areas of boxing, including owning a piece of Sonny Liston.

Forced to testify before a United States Senate subcommittee investigating corruption in the sport, he answered 25 questions, including a query about his name, by pleading the fifth, “I cannot be compelled to be a witness against myself.” All the omerta in the world couldn’t save him from eventually being prosecuted by Robert Kennedy for extortion, among other crimes, and sentenced to 25 years, some spent in Alcatraz.

Amazing to think a known hoodlum steeped in bloodshed and murderous score-settling could deploy ill-gotten gains to become the most influential person in the sport.

Of course, any resemblance to actual persons, living or dead, is entirely coincidental.