Andy Murray: Novak Djokovic tour should not have gone ahead 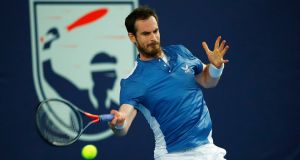 In normal circumstances, Andy Murray’s return to tennis after seven months away with a solid straight-sets win over an ebullient contender, Liam Broady, would be the feelgood moment of a shredded season starved of positivity.

Yet, as encouraging as his 6-2, 6-2 win was on the opening day of the Battle of the Brits – the charity event his brother, Jamie, has brought to London behind closed doors – Murray struck his most memorable blows in front of the microphone afterwards.

Mixing sympathy with a teeing-off, he said of Novak Djokovic’s revelation that he and his wife, Jelena, have tested positive for coronavirus: “First, I hope [they]are well and they recover, and that everyone who is affected is healthy and safe.” But he reserved a stiff jab for the way the world No 1 allowed his Balkans tournament to descend into a viral nightmare, from scenes of partying in a Belgrade nightclub, to the unfolding sadness of three other players testing positive in Zadar – including his friend Victor Troicki and his pregnant wife Aleksandra – and two trainers.

“In hindsight, it’s not something that should have gone ahead,” Murray said of the doomed and unsanctioned tour, which has been cancelled after two of the three legs. “It’s not surprising how many people have tested positive after seeing some of the images of the players’ party and the kids’ day. There was no social distancing in place.

“Some people have said maybe this has put the US Open in doubt – which it may well do. but the measures and the protocols they have in place at the USTA [United States Tennis Association] are different to Serbia and Croatia. No fans for a start. Coronavirus doesn’t care about who we are or what we do. We need to respect it and respect the rules.

“I don’t think it has been a great look for tennis. The only positive is that, until it is safe to do so, we have no fans at the event to reduce the risk as much as possible.”

Murray also took the opportunity to give solid support to the Black Lives Matter campaign following the killing of George Floyd and the “shocking scenes” around protests that ensued: “Like sexism, the same applies to racism – my feelings are the same. Some people see it as being a radical thing, I personally don’t. I just feel everybody should be treated the same, no matter your sex, colour of your skin, background, religion. It’s a pretty basic human right that everyone should be treated the same and given the same opportunities. But I am aware that is not the case.” Murray said he was heartened, nonetheless, by all the players kneeling before each match on Tuesday, a sight rendered all the more poignant in the silent arena.

As for his tennis, he was similarly satisfied with his serving and good finish, but reckoned his hip, such a burden the past couple of years, could move a little more smoothly yet.

“The hip that I have makes everything around it more complex,” he said. “It’s important to make sure my abdominal work is OK and it functions properly. Physically, it wasn’t perfect. These courts are the worst to move on.

“If you look at the way I am hitting the ball, I am not where I want to be. It’s good to get matches and see how my hip responds to playing three days in a row. It’s not the highest level but it is a good level. I’ll see how I feel at the end. Maybe I’ll get another match at the weekend as well. The intensity of the match is better than in practice. It’s pushing myself more.”

On a warm midsummer’s day indoors in London, Jamie Murray was a surprise loser in the opening doubles, alongside Neal Skupski, against Liam Broady and Cameron Norrie. He did not think the rolling Djokovic drama had, “put back tennis”, but he probably could have done without the distraction after spending several weeks putting this tournament together.

After their 3-6, 7-5, 11-9 defeat, the seven-times grand slam doubles champion said of the tournament that finished just minutes short of a conclusion in the aborted final in Zadar on Sunday: “That was an event that had thousands of fans turning up and we’re playing with no fans.

“As long as these tournaments [the upcoming majors in New York and Paris] are going to the lengths we’re going to put on events, then you’re creating a safe environment. Everyone [in other tournaments] is going to have to get tested, I imagine.“So I don’t think it really puts the Tour back, as such. They’ll have totally different rules in place to what’s been going on in Croatia, and wherever else they were playing.”

Kyle Edmund, who has bulked up in the lockdown, looked strong beating James Ward, 6-1, 6-4, and Dan Evans, the British No 1, had few problems accounting for Jay Clarke 6-3, 6-1. - Guardian