Foxall a key speaker at World Sailing conference in Mexico 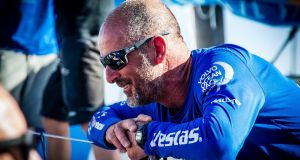 In one of several signs of things to come, Ireland’s Damian Foxall is not currently racing in the Volvo Ocean Race second leg that is preparing to cross the notorious Doldrums region over the weekend.

Instead, the Kerry yachtsman, who is a previous race winner, has just returned home to Canada via the World Sailing annual conference in Mexico, where he was a keynote speaker as part of his shoreside role with Vestas 11th Hour Racing team.

He will rejoin the team for the third leg through the Southern Ocean next month.

His original intention was to sail the second stage but a back injury to crewmate Phil Harmer, himself a veteran of the Green Dragon campaign a decade ago, saw Foxall step in for the first leg 1,450 nautical miles from Alicante to Lisbon, which the team won.

“This race is even more demanding than previous editions, and the in-port programmes are very intense, plus they’re much shorter,” Foxall told The Irish Times from Quebec. “This [changing crew members] is part of strategic and planned rotations.”

Another sign of things to come is reflected in Foxall’s shoreside role as the team’s sustainability manager which brought him to the conference in Mexico.

The global sailing governing body has just announced 59 steps as part of a programme that will address issues such as environmental protections and diversity.

How that is all connected to the professional racing teams in the mid-Atlantic currently reflects another change that will become more apparent at grassroots level in the coming years. Foxall’s team is one of two boats in the seven-strong fleet that is promoting an environmental message, while all the fleet is committed to similar race-wide objectives of raising the profile of ocean health.

In previous events such as this and others like the America’s Cup, cutting-edge technology developed at enormous expense would lead to trickle-down benefits on a larger scale within the mainstream sport.However, now there is a shift towards promoting the environment as much as typical commercial agendas.

How the high-level objectives and rhetoric translate into practical measures can be seen in the use of a fleet of one-design boats now in their second circumnavigation of the planet (and while the future profile of the Volvo Ocean Race may be in question, a third lap in these boats cannot be ruled out either).

“The reduction in the carbon footprint of the teams and this race is enormous,” says Foxall, who also cites North Sails’ new 3Di technology that doubles the life expectancy of racing sails.

But the sustainable future goes further, and moves are afoot to develop materials that can be recycled for other uses.

“Carbon has a value that makes recycling worthwhile, and the research is under way to find how this can be achieved,” said Foxall. “Even old and unusable sails have become attractive materials to recut for use in everything from bags and fashion accessories to tents, for use in relief aid work overseas.”

For Foxall, in addition to his racing work, his shoreside role is a natural progression from his work with the Canadian Wildlife Federation.

And his Kerry connections neatly continue with his partner and marine biologist Lucy Hunt, whose Sea Synergy Marine Awareness and Activity centre in Kerry has led her to become the sustainability programme manager for the Volvo Ocean Race.

1 Car sliced in half but Grosjean survives huge crash at Bahrain Grand Prix
2 Jim McGuinness: There is a way to save championship and make it competitive
3 Once in a blue moon: Cavan’s overnight success 15 years in the making
4 Limerick can count on the assurance that has eluded Galway at key moments
5 Waterford turn Kilkenny upside down and inside out
Real news has value SUBSCRIBE

Car sliced in half but Grosjean survives huge crash at Bahrain Grand Prix 15:11
Mike Tyson and Roy Jones Jr fight to a draw in Los Angeles 12:18
Limerick can count on the assurance that has eluded Galway at key moments 08:00
Once in a blue moon: Cavan’s overnight success 15 years in the making 08:00
Reshuffled France see off Italy to set up England final 23:04