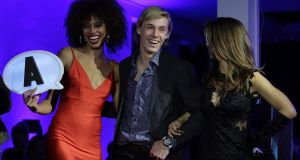 The ATP and sponsor Red Bull have apologised for holding a draw ceremony which featured male players selecting female models to escort them down a catwalk and described it as being “in poor taste”.

The draw was held in Milan on Sunday to determine the groups for the NextGen ATP Finals, a tournament taking place this week featuring eight of the world’s best players aged younger than 21.

The players were asked to select a model to escort them down a catwalk arm in arm before the model then revealed their group letter to the audience.

One woman lifted up her dress to show the letter ‘A’ written on her thigh while another took off her jacket, with the letter ‘B’ marked on her back.

American player Jared Donaldson looked particularly awkward while a model danced around him on stage. Red Bull sponsored the event.

The ATP, which governs the men’s game, has issued a statement, which read: “ATP and Red Bull apologise for the offence caused by the draw ceremony for the Next Gen ATP Finals.

“The intention was to integrate Milan’s rich heritage as one of the fashion capitals of the world. However, our execution of the proceedings was in poor taste and unacceptable.

“We deeply regret this and will ensure that there is no repeat of anything like it in the future.”

Andy Murray’s former coach Amelie Mauresmo tweeted a video of the draw on Twitter along with the caption “disgrace” while Judy Murray did the same, describing it as “awful”.

Most of the players involved looked bewildered during the ceremony, which is run by the ATP, the governing body of the men’s game, in partnership with the Italian tennis federation and the Italian Olympic committee.

The Italian tennis federation has said it was not involved in the organisation of the event.