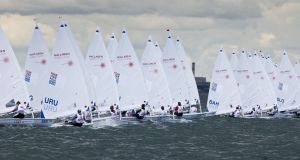 The Laser Radial boys’ fleet in the Youth World Sailing Championships on Dublin Bay in 2012. Conor Quinn will compete in the boys’ Radial class in China. Photograph: David Branigan/ISAF

With temperatures at home plummeting towards zero, only the most committed sailors are likely to be found on the water on these short winter days. However, payback for year-round training begins for four young Irish sailors on Monday when the World Sailing Youth World Championships begin in the Chinese resort city of Sanya. More than 380 sailors representing 62 nations will be competing.

As the oldest member of the squad and currently sailing full time, Sally Bell from the Royal North of Ireland Yacht Club is arguably Ireland’s strongest prospect for the Laser Radial women’s event.

“Through the [wind] range she’s been improving, so if she gets to stretch her legs and hike she’ll do well,” says Irish Sailing’s Rory Fitzpatrick. “She placed tenth at the Radial Youth Europeans, so she’ll be looking to repeat that result at least next week.”

Bell’s event is one of three that has Irish representation. Carlingford Lough YC’s Conor Quinn is her counterpart in the boys’ Radial class in which he narrowly edged ahead of the National YC’s Loghlen Rickard in the team selection stakes in the summer.

Waterford Harbour’s Geoff Power and Royal Cork’s James McCann will be competing in the double-handed 420 event for boys. With a good track-record, especially in breeze, they have grown their experience in the class and this is likely to be their final event. The Leaving Cert is looming large for them next year, and both are planning to go to college so decisions about whether to consider a full Olympic campaign are likely early in 2018.

Of the group Bell may have a go at the 2020 trials, but she will still have her eye on the long road for Paris 2024. In the meantime the line-up across the performance panels will start dominating competition and preparation next season.

Aside from actually qualifying Ireland a place in each event in Tokyo in 2020, a record number of boats are in the pipeline hunting for a place at the games.

There are currently five boats campaigning for the 49er skiff class – a massive increase since London 2012’s single campaign – and there is likely to be a similar number of contenders for the Laser men’s event.

Whether Annalise Murphy decides to campaign following her current hiatus competing in the Volvo Ocean Race may have a bearing on the women’s Laser Radial line-up, but that is likely to have four campaigns seeking the single place potentially available to Ireland.

An acknowledged weakness in the ongoing line-up is the lack of a double-handed girls’ crew that impacts on Ireland’s ability to deliver a 49erFX skiff or possibly a 470 team.

Fitzpatrick points to a cyclical gap in the train of younger sailors yet to emerge as double-handed training partners. However, given the strong interest in the Laser Radial, he sees several potential pairings joining forces from within the current squad.