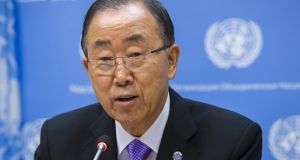 Former UN secretary general Ban Ki-moon was elected head of the International Olympic Committee’s ethics commission on Thursday as the Olympic body battles to improve its image amid a string of corruption cases involving senior members.

Ban, who had close ties with the IOC during his time as UN head from 2007-2106, was elected on a four-year term at a meeting in Lima and succeeds Senegal’s Youssoupha Ndiaye.

“Ethics is essential to the success of any organization,” Ban told the IOC session in a brief address which did not touch upon any specific cases. “That is why I did everything possible to strengthen the culture of ethics in the United Nations. I tried to lead by example.”

The South Korean has his work cut out with the IOC being criticized for not acting fast enough in several cases of its members in recent months.

The head of the 2016 Rio de Janeiro Olympics and former IOC member Carlos Nuzman, now an honorary member, is being investigated for corruption in an alleged votes-for-cash scheme to get the Games to Brazil.

Brazilian police raided his home recently and found cash and a Russian passport. He has denied any wrongdoing.

Nuzman has yet to be suspended by the IOC, even temporarily pending the investigation, though the Olympic body has asked Brazilian authorities for more information.

Irish long-time IOC member Pat Hickey was arrested during the Rio Olympics in relation to a ticket scandal but he has not yet been thrown out of the IOC and remains a “self-suspended” member. He has vehemently denied doing anything wrong.

Fellow IOC member, Kuwait’s Sheikh Ahmad Al-Fahad Al-Sabah has missed several key IOC meetings in recent months after not being named but referenced in US Court documents as being involved in a bribery case of world soccer’s governing body Fifa.

The IOC has not commented on his absence even though Sheikh Ahmad, who stepped down from all his posts in world football, heads the IOC’s $509-million Olympic Solidarity commission and chairs the Association of National Olympic Committees.