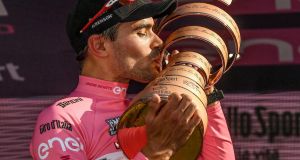 Dutch rider Tom Dumoulin kisses the trophy as he celebrates on the podium after winning the 2017 Giro d’Italia in Milan. Photograph: Alessandro Di Meo/EPA ,

The Giro d’Italia cycling race will begin in Israel next year, marking the first time any leg of the sport’s three Grand Tours will take place outside of Europe.

Organisers said that details of the exact route of the three stages to be held in Israel will be announced next week, with Italian and Israeli ministers making the announcement in Jerusalem along with the recently retired Spanish cyclist and two-times Giro winner Alberto Contador.

More than 175 of the world’s best cyclists will travel to Israel for the start of the race, one of cycling’s top three stage races along with the Tour de France and the Spanish Vuelta a España.

The Giro has started outside Italy on 11 occasions, in locations including Monte Carlo, Athens and Belfast, and will now leave Europe for the first time in its 101-year history.

The event is set to be the biggest sporting event held in Israel and is expected to draw tens of thousands of tourists to the country.

“This is a hugely exciting moment for cycling and for Israel,” said Daniel Benaim, the chief executive and owner of Comtec Group, the Giro’s Israeli production company. “An event of this magnitude is something that the country will always remember.”

A delegation from the Giro d’Italia is in the country finalising locations for the opening stages. Contador and fellow double Giro winner Ivan Basso are due to attend the ceremonial announcement in Jerusalem. While no stages will be officially confirmed until September 18th, Cyclingnews.com has reported that the opening stage is likely to be a time trial in Old Jerusalem.

The website has also reported that the Israeli government will contribute towards running costs and will also be responsible for security, with the event expected to be the biggest security operation in Israel’s history.