Rowing: Puspure’s heroics the highlight of a successful year 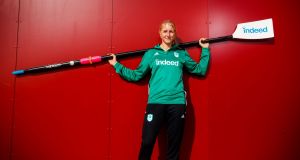 Sanita Puspure: qualified for the Olympics by claiming gold at the World Championships. Photograph: Billy Stickland/Inpho

The Ireland squad is winding down in training, all set to depart for warm-weather training camps at the end of this month. On a recent day at the National Rowing Centre there were 22 rowers working in the high performance gym, where once it might have just been Sanita Puspure.

Puspure and Paul O’Donovan have been the twin engines of Irish rowing. Around them now is arrayed a high-achieving team which will propel Irish rowing into 2020 with four, and perhaps as many as six, boats competing in the Tokyo Olympics.

Puspure is shortlisted for the RTÉ sportsperson of the year award for 2019. Few will have a more affecting story to tell. Her sister’s death from cancer punched a hole in everything. Sanita missed the World Cup series.

It was all or nothing at the World Championships in Linz in Austria, the qualifying event for Tokyo. Puspure rowed every race like her life depended on it. She won gold. She said then that she was thinking of Inese. “Now I can go home and cry my eyes out.”

With her in Tokyo will be the women’s pair. Monika Dukarska and Aileen Crowley kept their nerve well to qualify the boat; the women’s four were not far off and have every chance in the final qualifier this coming April. The World Under-23 silver medal shows what potential is there. The lightweight double of Margaret Cremen and Aoife Casey caught the eye in the recent trial and might yet join them in Tokyo.

If anyone wanted further proof of the efficacy of the Ireland system under high performance director Antonio Maurogiovanni, it was provided by Philip Doyle and Ronan Byrne. Ireland heavyweight men of world class have been thin on the ground. In 2019 these two young men (Byrne is only 21) lit up the season. The final in Linz was astounding – they finished so well, with only China denying them gold.

Byrne immediately went on to the European Under-23 Championships – he won gold in the single scull, coming from behind, of course.

Paul O’Donovan might well have been his inspiration. In 2016, after the Olympic silver medal in Rio, he flew to Rotterdam and won gold at the World Championships in a lightweight single. He is, in the words of his brother, Gary, in Linz “a freak”.

The break-up of the Gary-Paul axis – the reigning world champions in the lightweight double – might have shocked the public. But rowing is a hard sport. As the Irish Times reported at the time, Paul and Fintan McCarthy were the fastest crew in trialling – and went on to win in Linz.

That Skibbereen were able to produce not one but two world-class crews was amazing – but not surprising in that West Cork miracle factory.

The win for Paul and Fintan in the World Championships final was one of the highlights of the year and they have been deservedly nominated by RTÉ as team of the year.

After 500 metres, trailing the field, their hope of gold was gone. Well, in any realistic scenario it was. But you would back Paul O’Donovan on one leg and with his arms tied. It was Germany and Italy, the other medallists, who were barely able to move afterwards, so devastated were they by being hunted down and beaten.

And then there was the tale of the stroke coach. The piece of rowing machinery fell out of the boat as Paul and Fintan rowed in the World Cup final in Rotterdam. Paul somehow stilled the boat, flicked it back in with one hand and then carried on. They raced to silver, just three hundredths of a second behind gold medallists Germany.

The World Cup was opposite the huge Irish Rowing Championships and the Irish Times watched the World Cup final in a B and B. The wifi feed for press at the Irish Championships was promised but not available. Covering domestic rowing has not been easy this year.

UCD’s win in the men’s senior eights shines out from the huge championships. Their battle with Commercial over recent seasons has generally gone the way of Commercial. The reigning champions had a good Henley, but UCD were masters at the Championships. NUIG/Castleconnell were the top women’s eight.

The link between colleges and the Ireland high performance system has been less than ideal. Ireland’s top junior, Molly Curry, is being courted by top colleges in the United States and Britain. She is a hardworking and accomplished student bent on doing dentistry and open to staying in Ireland. It may demand work in the background to match athlete and course. It will be a good piece of work if Irish rowing can keep Curry on board.