Equestrian: Irish riders get off to flying start in Kentucky 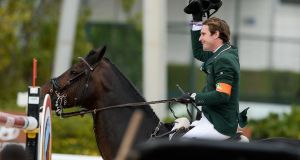 Irish riders have had an excellent start to the four-star show in Lexington, Kentucky by winning the first two international classes on the programme.

On Wednesday, Co Offaly’s Darragh Kenny took the honours when landing the opening Welcome Stakes on Billy Dorito. There were 57 starters from 10 nations in the 1.45m speed competition which took place over a 13-fence track designed by the USA’s Ken Krome.

Fifth to go in a class of 33 starters, Coyle fared best on Thursday afternoon when claiming the 1.45m speed and handiness competition on his own Irish Sport Horse mare CHS Krooze. The Canada-based rider stopped the clock on 51.88 with the nine-year-old Kroongraaf bay which was bred in Co Clare by Vincent O’Callaghan out of the Cruising mare, Cruise Oak.

The USA’s Catherine Tyree finished second with Catungee (52.22) while her compatriot Lillie Keenan, who had been first to jump, held on to place third on Agana van het Gerenal Z (53.92).

In the night’s featured 1.55m jump-off class, a qualifying round for Sunday’s World Cup class, Germany-based Bertram Allen finished third on the youngest horse in the field, Lafayette van Overis.

Recording one of 11 double clears in the 44-runner class, Wexford native Allen and the eight-year-old Belgian Warmblood gelding were home in 33.62 while Cork’s Shane Sweetnam was just a place behind on Chaqui Z (34.31). American riders filled the two top slots, Alex Granato winning on Carlchen W (32.76) with Adrienne Sternlicht finishing second on Toulago (33.51).

5 Jason Day remains in contention despite bizarre series of events