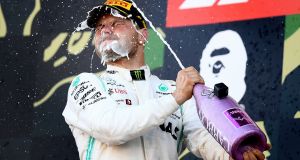 Valtteri Bottas of Mercedes celebrates on the podium after winning the Japanese Grand Prix in Suzuka. Photograph: Clive Mason/Getty Images

Valtteri Bottas won the Japanese Grand Prix, taking a controlled victory from Ferrari’s Sebastian Vettel in second. With the Finn’s Mercedes team-mate Lewis Hamilton in third it ensures the team secured the constructors’ championship. Red Bull’s Alexander Albon was in fourth, with Carlos Sainz in fifth for McLaren. Daniel Ricciardo came from 16th to sixth, with Charles Leclerc in seventh.

Bottas’s win has just kept his championship hopes alive, although Hamilton is still on course to take his sixth title. The British driver leads the Finn by 64 points and will take the championship if he is 78 in front after the Mexican Grand Prix.

The result means Mercedes now have their sixth consecutive constructors’ championship with four races remaining, another remarkable display of dominance from the team. It equals the record set by Ferrari between 1999 and 2004 and now that only Hamilton and Bottas can take the drivers’ title they are assured of becoming the first team to secure six consecutive drivers’ and constructors’ doubles.

Bottas has been bullish of late that he had to start taking his opportunities if he was to end the season strongly and backed his intent with a confident and controlled drive to deny his team-mate and Ferrari the win.

This is Bottas’s sixth career victory, his third this season and his first win at the Japanese Grand Prix. The victory also continues the Mercedes hegemony at Suzuka, the team remain unbeaten here since the turbo-hybrid era began in 2014. Bottas delivered a strong performance during weekend when he has looked quick in every session.

Bottas took the win having started from third on the grid after qualifying was postponed until Sunday morning because of Typhoon Hagibis. In a tight session run just four hours before the race it was Vettel who took pole with a fine lap. In Ferrari’s fifth consecutive pole Vettel was just under two tenths clear of Leclerc as the Scuderia locked out the front row for the third time this season. They had looked superb through every sector, finding time that they had not shown in practice, while Hamilton was fourth.

Mercedes had come into the race hoping to be at the front on a circuit at which they have good form. They had brought minor upgrades to the race which appeared to be working well. Their car, strong through the corners all season and working its tyres well, was again in its element here.

Ferrari, however, who have enjoyed a resurgence as they found performance over the last five meetings, once again could not convert their clear qualifying pace with Vettel making a mistake at the start and Leclerc hitting Max Verstappen on the opening lap.

Bottas made a blistering start from third to take the lead, while Vettel only crept away having moved before the lights went out but then checked the car. The German was investigated for a jump start, no action was taken but the damage was done.

Leclerc, from second, then hit Verstappen through turn one. The Ferrari driver took wing damage and was forced to pit for a replacement after his wing shed debris into the path of Hamilton, who had remained in fourth. Verstappen, who had been blameless, had to retire because of the damage on lap 15.

The incident was investigated and Leclerc given a five-second penalty for being at fault. He was then also penalised a further 10 seconds when Ferrari did not pit their driver to deal with the wing damage. The penalties, imposed after the race, dropped him from a sixth-placed finish to seventh.

Bottas promptly opened up a two-second gap on Vettel, who was comfortably matching the Finn’s lap times, while Hamilton was edging up in third. Ferrari pitted Vettel first on lap 17 to take the soft tyres, committing to a two-stop race. Mercedes reacted and pitted Bottas a lap later as the team confirmed he would be also be two-stopping with Hamilton initially on a one-stop strategy.

Hamilton stayed out while Bottas threw down quick times on his new rubber. Mercedes brought the world champion in on lap 22 for the mediums – able to one-stop – and emerged in third but he was immediately concerned at the time he had lost staying out and whether he could make it to the end on his tyres. The team switched him to two-stop and told him to push.

Vettel made his second stop on lap 32, followed by Bottas on lap 37, leaving Hamilton leading until he too came in on lap 43. Emerging in third he set off chasing down Vettel on fresher rubber but although he caught the German could find no way past with the Ferrari’s straightline speed. Bottas, however, had maintained his composure out front from the moment he took the lead and held it to the flag for a well-deserved victory.

Daniel Ricciardo was an impressive seventh from 16th on the grid for Renault, with his team-mate Nico Hülkenberg in 10th. Toro Rosso’s Pierre Gasly was eighth, with Racing Point’s Sergio Pérez in ninth. – Guardian