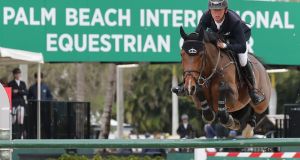 From a starting line-up of 53, the Wexford native posted one of 21 clears but his was the only one to break the 60-second barrier. Allen stopped the clock on 59.91 to take the honours ahead of Mexico’s Santiago Lambre riding Doloris (60.71).

Allen took over the mount on Lafayette van Overis in August last year and, shortly afterwards, partnered the gelding to two five-star wins at the Tryon International Equestrian Center in North Carolina. “He was very good during my first trip to America in the fall, which was great for an eight-year-old,” commented the Germany-based rider.

“I eased off him a bit after that, and now he’s back. I was delighted with him today. He has a fantastic brain and truly understands the sport. He’s very competitive, brave, and wants to do it, so I think he’ll end up jumping a few bigger classes in the future.”

The first five-star competition of the festival was held on Thursday when 52 combinations contested the 1.55m jump-off class, round five of the Equinimity WEF cup. Best placed of a large contingent of Irish riders was Kerry native, Captain Brian Cournane, who, having held the lead early, eventually finished fifth on the Irish Sport Horse mare Penelope Cruz, a 12-year-old by Ustinov. The winner was the USA’s Kent Farrington riding Austria 2 (40.68).

The Hickstead-based rider was one of 12 to leave all the fences intact and did so in the fastest time of 24.88 seconds on Evita, an 11-year-old Dutch Warmblood mare owned by Prince Torki Saud. Germany’s David Will and Holger Wulschner finished second and third respectively on Darius de Kezeg Z (26.20) and Casirus (29.07).

On Friday, Shane Breen won another five-star class at the show but on this occasion, riding his own and Team Z7’s Z7 Ipswich, he had to share the spoils with Egypt’s Mouda Zeyada on Morocco. The two riders were among eight who recorded a double clear in the 1.50m jump-off class, the pair doing so in 31.10 as New Zealand’s Bruce Goodin finished third with Backatorps Danny V (31.47).

Irish riders competing at the five-star show in Bordeaux, France have yet to get among the placings but, in Friday night’s indoor eventing competition, Kildare-based Cathal Daniels partnered Sarah Hughes’s Alcatraz into fifth behind the host nation’s Karim Laghouag who recorded the only clear with Punch de l’Esques.