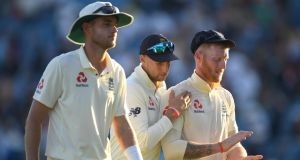 This was the day when the poverty of English batsmanship in this form of the game was laid bare. The Ashes hung in the balance; there was scope for England to bat with hope having dismissed Australia for 179 on the first day. The sun, supposedly the batsman’s friend at Headingley, was out.

Before the start the mood was upbeat as the caterpillar of spectators wriggled its way through the turnstiles. This was a day of Test cricket to savour when a rejuvenated England side just might turn the series round.

The Australians bowled exceptionally well with Josh Hazlewood, a towering presence as he ran in from the Rugby Stand End, hitting a length and the seam with brilliant consistency. Pat Cummins was aggressive, allowing no liberties at the start and relentlessly bouncing the lower order, while James Pattinson profited from two tempting full-length deliveries.

Unlike England on Thursday the Australian bowlers remained ruthlessly disciplined after making early inroads. In the Australian first innings there was only one partnership of significance, 111 precious runs from 23 overs. In England’s innings the best partnership was 14 between Rory Burns and Ben Stokes; Joe Denly, with a painful 12, was the only man to reach double figures. There was no respite.

So the match confounds us all. This is no terror track and yet the batsmen have had nightmares. There is more pace here than at Edgbaston or Lord’s, which is a virtue and should always be regarded as such; the surface is dry with the odd crack and it remains something of a mystery how the ball has continued to move even in Friday’s sunshine. It always moves more when the batting is dire.

There was no time for the Australian bowlers to tire, which is a sound goal for any batting side playing against a three-man pace attack. If ever they began to feel weary an English batsman would soon energise them with a tentative prod or a wayward stroke designed to break the shackles, yet only succeeding in crushing the hopes of an Ashes series still being in the balance come September.

The procession of English batsmen was ugly, rapid and grimly predictable.

Jason Roy struck two boundaries but then nibbled at another fine Hazlewood delivery to give David Warner the first of four catches at first slip. Despite a second-innings failure the signs are that Warner is picking up the ball better now.

Then Joe Root registered another duck, the first time he has been out for consecutive noughts in Test cricket. His innings lasted twice as long as at Lord’s, two balls, as he too was snapped up by Warner. It is hard to tell whether a batsman is out of form when his innings are so brief but Root is undoubtedly feeling the heat now. He cannot score any runs. Is that because he is at three or because he is drained and consequently out of kilter at the crease? More likely the latter. His side keep squandering chances to control the game and the dream of regaining the Ashes drifts away on the breeze like the fluff from a dandelion.

Rory Burns has been England’s stalwart but here he flapped needlessly down the legside at a Cummins bouncer and was caught by Tim Paine. Ben Stokes and Denly were seduced by apparent wide half-volleys from Pattinson. Down they went on their back knees for their drives and the edges were safely caught. Jonny Bairstow’s nick came from a back foot prod, which meant that England took lunch at 54 for 6.

The break failed to arrest the collapse. Cummins took an age to set his field for Chris Woakes and the stationing of a variety of legside fielders signalled his intention to deliver a bumper barrage. Everyone including Woakes knew what was coming but that did not prevent the first ball being gloved down the legside.

In the next over from Hazlewood they placed a short extra cover for Jos Buttler, who immediately drove silkily in that direction and the ball finished inches off the ground in the hands of Usman Khawaja. The odd swish from Jofra Archer, a shuffle from Jack Leach and the innings was over. So too in all probability the match and the pursuit of the Ashes. Somehow after their trials on the first day Australia had a lead of 112.

The England bowling attack must have felt like men betrayed as they were tossed the ball on a sunny afternoon ripe for putting the feet up. Stuart Broad dispatched Warner lbw early on; Leach’s first ball bowled Marcus Harris through the gate and then he was mysteriously removed after two overs with the inevitable recall of a weary Archer. Khawaja edged against Woakes but Marnus Labuschagne proved a patient, stylish obstacle yet again.

On 14 he edged against Stokes and the ball flew to first slip. There Root juggled and the ball fell to ground to confirm one’s suspicions: that this was a day – and quite possibly a series – he would like to forget. Later there was an edge from Labuschagne off a no-ball and another edge from the same batsman was spilled by a diving Bairstow off Stokes.

Stokes bowled an almighty spell from the Rugby Stand End in the final session interrupted by just four deliveries from Archer, after which England’s latest cap had to withdraw to the pavilion for a while suffering from cramp.

During his marathon Stokes yorked Travis Head and had Matthew Wade caught behind but this was scant reward for his herculean efforts as the ball began to reverse. Broad then snared Paine for a duck on a barren day for the two captains but despite failing to score the Australian captain was much the happier man at the close. Root could only contemplate once more that a day can be a long time in a Test match. – Guardian