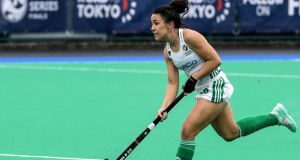 All-time top scorer Anna O’Flanagan added another vital goal to her memorable collection to earn Ireland a 2-1 win over Belgium that all but secures safety for the 2021 edition of the European Championships.

It came with just 80 seconds to go against the hosting Red Panthers, stunning a half-full stadium as the home fans stayed away with no semi-final to look forward to.

O’Flanagan gambled, ghosting in behind the last defender as Nicci Daly’s touch flipped into her path after a remarkable Shirley McCay pass, volleying in past Aisling D’Hooghe.

The striker joked the ball should never have come her way as the Irish bench implored McCay not to risk taking on her high tarriff backhand cross, suggesting a clean strike was a one in a 100 chance.

Belgium went to video, perhaps shocked at how perfectly it flew into the middle, giving the crowd a slo-mo glimpse of a lovely piece of skill.

It crowned a topsy-turvy game in which Ireland started slow, adjusted their press to dominate and take the lead via a smart corner move – McCay assisting Beth Barr.

A second proved elusive as a penalty stroke decision was downgraded on video review and Belgium went on to boss the third quarter.

Ambre Ballenghien put the game back in the melting pot with 16 minutes to go with a simple finish to Alix Gerniers’s thrust down the right.

Ireland survived five minutes with Nikki Evans in the sin-bin before pouncing late in the day.

It puts Ireland with a point of equaling their best finish in Europe, fifth, the new target after the semi-final dream slipped away on Wednesday.

“We had a point to prove; we were really close to getting into a semi-final for the first time for Ireland,” O’Flanagan said.

“We missed so narrowly but now we want to get fifth in the tournament. When it went to 1-1, we had to dig deep and were resilient. We knew a chance would come and we had to take it.”

It was also important to show they belong at this level with expectations significantly raised since last summer’s World Cup silver.

It is something the side is acutely aware of and so a pressurised win against a top 10 side was needed.

“We have a new ranking now; when you are 16th, its okay to play above that. Now, it’s really important for us to play at our ranking and we’ve done that at this tournament.

“Doing that at this tournament at that new level, it’s really promising. We narrowly missed out against number four and five in the world but have beaten a team around us. That’s what we need to in October’s Olympic qualifiers as well.”

The Irish men, meanwhile, have a stressful day ahead of them. They could be relegated if England and Scotland draw in the first game on Saturday morning in Pool C.

A win for either will open the door for Ireland but they must win against Wales, potentially by a couple of goals, to stay afloat.

Tottenham offer out of favour Dele Alli to PSG 16:27
Wolves to sign Nélson Semedo to replace Matt Doherty 15:43
Ulster’s European dream clinically crushed by Toulouse 15:39
Racehorse owners to return to tracks in Ireland on Monday 15:11
Dreal Deal’s Navan win to be investigated as huge gamble lands 15:07
Here is your handy guide to sport on television this week