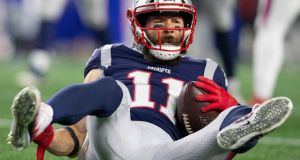 An instant after a violent collision on Saturday evening in the pivotal, hard-fought game between New England and Buffalo, Patriots wide receiver Julian Edelman lay motionless on the turf as if unconscious. It was, Edelman said hours later, a ruse. When he slammed into Bills defensive back Jordan Poyer while running a crossing route early in the third quarter, he had committed offensive pass interference – and Edelman knew it.

“I was trying to sell it,” a smiling Edelman said of his play-acting on the turf. “Hopefully, they didn’t see it.”

Instead, Edelman was almost hit in the stomach by a penalty flag thrown by an official for the infraction. Edelman immediately rose from the Gillette Stadium turf to see that his wrongdoing would also nullify a Patriots touchdown pass to Benjamin Watson. Not only that, but Edelman was forced to miss a quarter of the game while he was examined and observed for a head injury that Edelman admitted he had faked.

When he returned roughly midway through the fourth quarter, New England was trailing Buffalo by one point in a game that figured to help settle important playoff seedings. But on Edelman’s first play, the New England offence, which had been scoreless since Edelman’s exit, roared back to life.

Patriots quarterback Tom Brady flung a bullet of a pass toward Edelman, who caught it over the middle, bounced off a defender trying to flatten him and dashed down the field for a 30-yard gain. Six plays later, New England running back Rex Burkhead pushed into the end zone on a one-yard touchdown plunge, with Edelman catching another Brady pass for a two-point conversion that accounted for the final points in a crucial Patriots 24-17 victory.

“It was a weird situation,” Edelman said. “But the end was a big win.”

The victory clinched New England’s 11th consecutive AFC East championship and kept the Patriots (12-3) in a good position to retain a first-round bye in the postseason as the conference’s second seed. A victory over the lowly Miami Dolphins in the Patriots’ final regular-season game on December 29th would assure them a first-round bye.

“It was an unfortunate play,” Brady, who completed 26 of 33 passes for 271 yards, said of Edelman’s penalty and subsequent absence. “I was glad he came back because he made a big play right away.”

Matthew Slater, the New England wide receiver and special teams ace who dresses next to Edelman in the Patriots locker-room, had his own take on the peculiar sequence of events.

“Oh, you mean Lazarus?” Slater said when asked about Edelman. “He was kind of funny the way he laid out there. But Edelman came back from the dead.” Without question, joking about potential, or pretended, head injuries is not common in pro football locker-room – nor will the NFL likely find it too amusing. But at this time of year, the six-time Super Bowl champion Patriots are usually a story of stunning revival.

Just a few weeks ago, after New England lost to three AFC elites in Baltimore, Kansas City and Houston, the Patriots’ long run as kings of the conference seemed doomed – as it has been at some point seemingly every year in this decade.

But on Saturday night, once again, the Patriots had denied an upstart in the Bills and were crowing about yet another division title. Well, crowing in their own way. In the locker-room, players were wearing T-shirts embossed with “The East is Not Enough” in large block letters. In small print underneath: “Division Champions”.

“Well, it’s true. Around here the season is not over,” Edelman said. But Brady knew what Saturday’s entertaining, back-and-forth game had earned for the home team.

“If we win next week, we miss a playoff week, which is a pretty good reward,” Brady said. “That makes the next game like a playoff game, and we control what happens with our play.”

For Buffalo (10-5), it was a seventh successive loss to the Patriots, and it came down to a final drive with a little more than a minute left in the game. The Bills nearly scored a touchdown that would have given them the chance to tie the game, or take the lead with a two-point conversion. But quarterback Josh Allen, who played well but was on the run from a relentless New England pass rush throughout the game, threw a last desperate pass into the end zone that was batted down by Patriots defensive back JC Jackson.

“We made a lot of plays,” Buffalo coach Sean McDermott said. “We just needed a few more. But this is a young football team that continues to grow and get stronger.”

Afterward, in one of the rarest regular-season sightings, New England coach Bill Belichick broke into an unsolicited smile after the game. “Yes sir, a good feeling here today,” Belichick said. “Good to see the fruits of a lot of hard work.” – New York Times