The Winter Olympics: All you need to know

When is it on, where can I watch, what to look out for? We have the Pyeongchang lowdown

Athletes from South and North Korea march into the stadium together behind a Korean flag for the opening ceremony of the Winter Olympics in Pyeongchang. Video: BBC 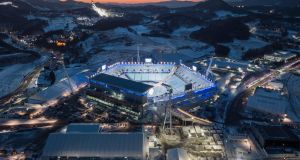 A of the venue for the opening and closing ceremonies of the 2018 Winter Olympics. Photograph: Getty Images

It’s Winter Olympics time again, and soon some of the world’s best athletes will be schussing down the slopes, whirring through the air, zooming down the tracks and skating across the ice. This year, the Winter Games take place in South Korea for the first time. Here’s all you need to know about the coming events.

When are the Winter Olympics?
They start on Friday, February 9th and run until Sunday 25th (there are a few preliminary events on Thursday).

Where is Pyeongchang?
The host city of the games is in the northeast part of South Korea, about 50 miles from the North Korean border. South Korea’s winter sports resorts are not as well established as ski hubs in Europe, North America and Japan, but these games could change that.

Why is it spelled different ways?
As part of an effort to avoid confusion with Pyongyang, the capital of North Korea, the city 10 years ago added an “e” and capitalized a “c,” rendering itself PyeongChang, rather than Pyongchang. To confuse matters, while some western news media companies have accepted the new spelling, others are sticking with the original.

What is the time difference?
Pyeongchang city is nine hours ahead of Ireland and many big events will be quite late/early for Irish viewers: The men’s hockey final on February 25th will finish at 4pm Korean time, or about 7am here. Women’s figure skating on February 23rd ends about 5am while the men’s downhill skiing on February 11th will run until about 2am.

How can I watch?
Both RTE and BBC will show the opening ceremony on Friday morning (11am Irish time). The BBC’s daily live coverage will start at 11.05pm on Friday night and the broadcaster will provide around the clock coverage throughout the Games. RTE2 will have a daily highlights show, generally at 7pm but be advised that it will move around the schedule.

Will there be enough snow?
There was concern before the 2014 Games in Sochi and the 2010 Games in Vancouver that there would not be enough snow, though in the end both games went off successfully. But that should not be a problem this year; Pyeongchang gets heavy snowfalls. The average high temperature in February is just over freezing and drops to -8 degrees at night.

Is the city ready?
At some recent Olympics, preparations went down to the very last minute. But the venues and hotels of Pyeongchang seem to be ready to go. One area of concern is ticket sales, which have been slow.

Will Russia be there?
Yes and no. After evidence emerged of systematic state-sponsored doping at the 2014 Sochi Olympics, there were calls to ban Russia from Pyeongchang. In the end, there was a compromise ruling. Russian athletes who have a doping-free background can participate. But they will not formally represent their country and will be listed as “Olympic Athletes From Russia.” The Russian anthem will not be played, the Russian flag will not be displayed and Russian government officials will be barred from attending.

Will North Korea be there?

North Korea has agreed to send a delegation of athletes, as well as a cheering squad and a performance-art troupe. It will be the first time North Korea has participated in the Winter Games in eight years. There had initially been talk of North Korea hosting some events, but that did not pan out. North Korea boycotted the 1988 Summer Games in Seoul, South Korea.

Do the athletes get any money?
There is no prize money from the International Olympic Committee for winners. But many national federations give payments to athletes for winning medals (the United States will award athletes $37,500 for winning a gold medal).

Are the medals really gold - and why do the athletes sometimes bite them?
Gold medals are made of silver and then gold-plated. The medals this time around are designed to look like the texture of tree trunks. The silver medals are almost entirely silver, and the bronze medals almost entirely bronze. Athletes often pose biting their medals, mostly because photographers urge them to. The gesture mimics people biting gold many years ago to determine if it was real: Real gold should be soft enough for teeth to mark.

Are there any new events this year?
Mixed doubles in curling, a 16-lap mass-start race in speed skating, a team Alpine skiing event and “big air.”

Big air?
It’s a snowboarding event in which athletes launch off a jump, gaining enormous altitude, and perform tricks, which are judged.

And a mass start?
It’s longish speedskating event in which the whole field of about 25 races together, rather than two at a time. Expect crashes.

How does the team skiing work?
Each nation sends two female and two male skiers down a short slalom course, racing head-to-head against an opponent. The team that wins more races, or has the lowest combined time, advances to the next round.

Which events are missing?
The parallel slalom snowboarding events, in which two snowboarders raced head-to-head, were dropped.

Can I hear lyrics?
Yes, for the first time singles and pairs skaters at the Olympics may compete to music with lyrics, not just instrumentals. But not all of them will do so. Some of the top skaters will be sticking with tried-and-true classical music and film scores.

How does curling work?
In curling, teams slide stones down the ice toward a target. Players with brooms sweep the ice to try to slow or speed the stone so it lands where they want it to go. After each team has bowled eight stones, the team with the stone closest to the centre scores a point for every stone closer than the opponents’ closest (think of it as bowls on ice).

What is “the hammer?”
It is to a team’s advantage to bowl the last stone. The team having this edge is said to have “the hammer.” Whichever team does not score in the previous round gets the hammer in the next round.

How does the biathlon work?
It’s essentially a cross-country skiing race, with some rifle shooting thrown in. Skiers periodically stop to shoot at a target. If they miss, they get a penalty, generally having to ski a short penalty loop.

Who are the top figure skaters?
The men’s world champion is Yuzuru Hanyu of Japan, who won in Sochi and is still going strong. His younger teammate Shoma Uno is threatening the throne; he likes to land the big quads. The Sochi silver medalist, Patrick Chan of Canada, and the fourth place finisher, Javier Fernandez of Spain, are also still competing. Evgenia Medvedeva of Russia has moved to the top of the women’s world rankings over the last couple years. At 18, she is already a two-time world champion. Her specialty is the triple-triple-triple. Tessa Virtue and Scott Moir of Canada (gold 2010 and silver 2014) are back in ice dancing.

Who’s on the Irish team?
This year we’ve sent of team five Irish athletes, hailing from far and wide, to North Korea. At just 20-years-old Seamus O’Connor, a snowboarder from San Diego is the lone veteran of the group having competed for Ireland in Sochi four years ago. Patrick McMillan (25), from Ogonnelloe in Co Clare, will compete in the alpine skiing as will Tess Arbez (20), who was born and raised in the French Alps. Cork-born half pipe skier Brendan ‘Bubba’ Newby (21) honed his skills in Utah, where he has lived since he was two while Thomas Westgard (21) makes up the team. The cross-country skier is from a tiny Norwegian island called Leka but is a dual Irish-Norwegian citizen.