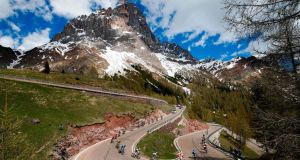 Riders take the descent of the Rolle pass during stage 20 of the Giro d’Italia from Feltre to Croce D’Aune-Monte Avena. Photograph: Luk Benies/AFP/Getty Images

Pello Bilbao (Astana Pro Team) got the best of fellow Basque Mikel Landa (Movistar Team) on the final mountain stage of the Giro d’Italia on Saturday, outsprinting him and three others to the finish line at the summit of the Croce D’Aune/Monte Avena climb.

Irishman Eddie Dunbar put in another superb showing, spending the bulk of the 194-kilometre stage from Feltre in the day’s breakaway group. The 22-year-old shrugged off the fatigue of riding his first Grand Tour to attack on what was the final mountain stage of this year’s race, going clear with 11 other riders on the day’s first climb, the category two ascent of Cima Campo.

He was still there hours later, being part of a whittled-down group of seven riders. He was eventually overhauled by the general classification contenders in the closing kilometres of the last climb, finishing one minute 59 seconds behind Bilbao in 19th place, but showed that he is finishing his biggest race to date in strong form.

Overall leader Richard Carapaz (Movistar Team) came under pressure from several of his big rivals, particularly closest challenger Vincenzo Nibali (Bahrain-Merida), but was more than able to respond to the surges. He, team-mate Mikel Landa and Nibali got clear and built time over former race leader Primoz Roglic (Team Jumbo-Visma), with Carapaz and Nibali eventually finishing fourth and fifth on the stage.

Roglic trailed in 54 seconds back and suffered a further 10-second loss after the race jury decided he did nothing to dissuade a fan from giving him a long push on the penultimate climb.

The time conceded on the stage saw him drop from third to fourth overall. Carapaz is now one minute 54 seconds ahead of Nibali and has almost certainly too much of an advantage heading into Sunday’s concluding 17-kilometre time trial in Verona. Landa leapfrogs over Roglic but is two minutes 53 seconds back, he is just 23 seconds ahead of Roglic and will almost certainly be overtaken for the final podium by his rival, who is a far stronger time trialist.