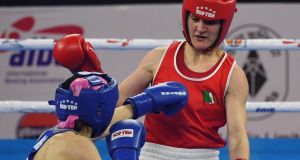 Ireland’s Kellie Harrington took another step closer towards emulating five times world champion Katie Taylor with a unanimous 5-0 win in her semi-final of the World Amateur Boxing Championships in India.

Dubliner Harrington, who dropped from light welterweight to the 60kg division, won her semi-final against Kazakhstan’s Karina Ibragimova with an aggressive, offensive bout against her rangy southpaw opponent.

Ibragimova, fighting from a distance, tried to keep the Irish boxer out of reach with her long right jab. But Harrington fought hard to land scoring combinations and each time the Kazak scored the Irish fighter countered.

Well prepared for the awkward opponent by coach Zaur Antia, Harrington’s first three punch volley arrived early in the first round and while Ibragimova was scoring it was Harrington who was showing the more aggression and willingness to go forward.

Backing the first up with a busy second, patience also played its part as Harrington worked hard to get inside, score and move out. Pressing all the time, Harrington brought up the tempo for the closing stages of the bout and while she missed with two huge lefts, it was that energy to score and good footwork that largely kept her out of trouble. She impressed all five of the judges for a clear cut win and final place where she faces Thailand’s Sudaporn Seesondee.

It is the second time Harrington has been to a world final. Two years ago she won the silver medal in Kazakhstan at the heavier weight before dropping down to the Olympic category after Taylor turned professional following the Rio Olympic Games.

It was Taylor who first won world championship gold for Ireland in the lightweight division, coincidentally also in New Delhi, India in 2006.

Taylor’s world championship haul of five gold medals is now under threat from the veteran boxer Mary Kom. The Indian star fought her way to another world final and a chance to take her gold medal count to six.