‘American, Canadian sportsmen have been caught even more than Russians’ 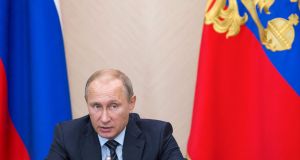 Mixing howls of indignation with vows to do more to fight doping in sport, Russia has rejected allegations of running a major state-backed operation to hide the use of performance-enhancing drugs by its athletes.

The claims made in a devastating report by the World Anti-Doping Agency (Wada) leave a deep stain on Russian sport, which President Vladimir Putin has used to promote what he portrays as his country’s return to its rightful place as a world power.

Grave doubt now surrounds the legitimacy of Russia’s medals haul at the 2012 London Olympics, the conduct of the 2014 Winter Olympics in the Russian ski resort of Sochi, and the country’s participation in major forthcoming athletics events - foremost among them the 2016 Rio Olympics.

More questions could now also be raised about plans for Russia to host the World Cup in 2018, with Fifa embroiled in a major corruption scandal and the country’s sports minister, Vitaly Mutko - a member of Fifa’s executive committee and key figure in World Cup preparations - castigated by the Wada report.

The Kremlin was defiant today, however, as Mr Putin’s spokesman questioned Wada’s findings and suggested that Mr Mutko had the president’s full support.

“Whenever any charges are made, there must be some evidence they rely on. As long as there has been no proof, it is hard to react to any accusations, which look rather groundless,” said Kremlin press chief Dmitry Peskov.

He added that Mr Putin and Mr Mutko “often communicate on business issues”, that “some Olympic-related events are scheduled for this week”.

Asked whether Russia’s president had concerns about the beleaguered sports official, Mr Peskov shot back: “Mutko is the incumbent minister, so I do not understand your question.”

Amid claims from Russian state media that the Wada report is part of a Western campaign to attack the country on all fronts for its actions in Ukraine and Syria, Mr Peskov said: “It’s none of our business to ponder the causes of such scandals.”

Others were less reticent in suggesting that sport is now another battlefield in a “new cold war”.

“This whole thing smells like a political hit-job,” said Artyom Patsev, a lawyer for the All-Russian Athletics Federation, said of the Wada report.

“That’s why the information is given in the form of ‘recommendations’. Because if there had been something to be disqualified for, they would have done it long ago, with no questions asked.”

Sergei Poddubny, the deputy head of the Russian parliament’s committee for sport, dismissed Wada claims as “a purely political declaration”

“They have no relation to sport . . . Let’s be clear: American, Canadian sportsmen have been caught even more than Russians. Literally every year they are doping and sportsmen are caught. But there was never this big scandal - why?”

The Ministry of Sport said today it was studying the Wada report, and its recommendations would “help Russia to further improve its anti-doping system.”

The ministry insisted that it was “not surprised” by most of Wada’s findings, had already taken steps to address drug issues, and remained “fully committed to the fight against doping in sport.”

After the report’s release, however, Mr Mutko - the head of the organising committee for the 2018 World Cup - had threatened to sever funding for all anti-doping programmes in Russia.

“Whatever we do, everything is bad. If we have to close this whole system, we would be happy to close it. That would mean no funding for any Russian anti-doping agency or laboratory,” he said.

He also defended the destruction by Russia’s anti-doping lab of 1,417 test samples shortly before an international inspection, in terms that will not ease the alarm of all those who question the attitude of Russia’s sports official on this issue.

“The whole world should do this. To keep test samples for 10 years is stupid,” Mr Mutko told Interfax news agency. “They did (the doping tests) and awarded the medals. Goodbye! Why keep coming back to it all the time?”