Darren Lehmann breaks down as he resigns from Australia 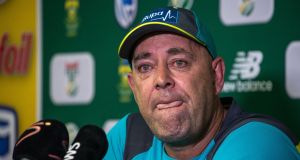 Darren Lehmann speaks to the press as he announces he will resign as Australian cricket coach. Photo: Wikus De Wret/Getty Images

Darren Lehmann will leave his post as Australia’s head coach after the fourth Test against South Africa, which begins on Friday.

Cricket Australia confirmed his departure, which had appeared unlikely when it was announced earlier in the week that he would remain in his post until the end of his contract.

That was due to run until the end of the 2019 Ashes series in England, but now Lehmann has joined the casualties of Australia’s Cape Town debacle.

Lehmann had been cleared by a Cricket Australia investigation into the ball-tampering, with Sutherland saying on Tuesday the coach had no prior knowledge of the plot.

At the time, Sutherland said it was “inaccurate” to say Lehmann had resigned, but now he has decided to quit.

“It’s the right time to step away,” Lehmann said, speaking at a press conference. “I’m ultimately responsible for the culture of the team and I’ve been thinking about my position for a while.

“Despite telling media yesterday that I’m not resigning, after reviewing Steve and Cameron’s hurting it’s only fair that I make this decision.

“This will allow Cricket Australia to complete a full review into the culture of the team and allow them to implement changes to regain the trust of the Australian public.

“This is the right thing for Australian cricket.”

Lehmann added: “Like all Australians we’re extremely disappointed and as a team we know we’ve let so many people down and for that we’re truly sorry.

“The players involved have been handed down very serious sanctions and they know they must face serious consequences.

“They’ve made a grave mistake, but they are not bad people.”

He choked back tears as he thanked his wife Andrea and four children and close friends “for allowing me to do this job and supporting me 100 per cent every step of the way”.

He added: “It’s been a wonderful experience coaching the Australian cricket team. I hope the team rebuilds from this and the Australian public find it in their hearts to forgive these young men and get behind the 11 who are going to take the field tomorrow.”