Darren Lehmann: Australia ‘need to work to earn respect back’ 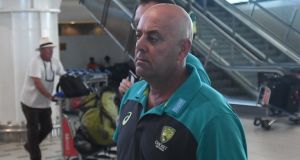 Darren Lehmann used his first public remarks since the disaster that wiped out the leadership of the humiliated Australian side he coaches to deliver a simple message: they must immediately and drastically change the way they play the game.

Speaking at the end of another dramatic day, Lehmann confirmed he had no prior knowledge of the crime, nor the botched cover-up where the banned trio claimed they tampered the ball with tape when in fact it had been taken to more insidiously with sandpaper. Rejecting reports that he would resign, Lehmann instead insisted that following the “grave mistake” at Newlands he was the right man to start to restore public trust in the team, trust that he conceded has completely evaporated around the cricket world since Saturday afternoon.

“I need to change,” he said of the personal task as the architect of the team culture now being formally investigated by Cricket Australia. In an utterly stark readjustment, he added that notorious “nice guys” New Zealand would be the side they would try to emulate.

Earlier in the day James Sutherland, the Cricket Australia chief executive, explained why Iain Roy, the integrity officer running the investigation into the episode, exonerated Lehmann from any involvement. Specifically, he spoke to footage that looked damning of the coach directing Cameron Bancroft to hide the sandpaper once sprung by the television broadcast.

“[LEHMANN] radioed down and he said: ‘What the fuck is going on?’” Sutherland told reporters in Johannesburg after informing the condemned players of their fate. “He said to [twelfth man Peter] Handscomb: ‘Find out what the fuck is going on’.” It was this contemporaneous evidence that confirmed in Roy’s mind that the plot did not extend to the coach.

Lehmann confirmed there were “a couple of expletives” when giving his own version of events but was not able to explain why Steve Smith and Bancroft elected to brazenly lie to match officials and the media because they lied to him as well. “Yeah,” he said when asked if they had changed their original story. “The truth is in the integrity unit investigation and it’s obviously not ideal. [I FOUND OUT]once all the processes had happened.”

Despite CA finding in its charges against David Warner that he had given Bancroft a tutorial on scuffing the ball with sandpaper, Lehmann is “pretty confident” it was the first time. It will not be the last time that question is asked.

Moving on to the front foot, Lehmann noted in his prepared remarks that he is ready to cooperate with a review of the conduct of the side he has coached since 2013. “From this point forward we need to work to earn the respect back. We understand the enormity of it and the public perception. The team has been received quite negatively in recent times and there is a need for us to change.”

In a sign that the cringeworthy “line” that his side has talked about playing within is now a thing of the past, Lehmann went on to note that the “boundaries” they play within need to be urgently recast. “Previously we’ve butted heads on the line but that’s not the way to go about us playing cricket moving forward.”

In the 2015 World Cup final, Lehmann was among a chorus of Australian voices that mocked the New Zealanders for their “nice” persona on the field, going out of their way to make life difficult in the decider. Now, he believes the Black Caps show the way forward.

In a plea to the media and public to be mindful of the now-suspended trio, Lehmann emotionally detailed the toll the previous four days had taken on them. “They have been handed down very serious sanctions and they knew they must face the consequences. They have made a grave mistake, but they are not bad people.”

With a bead of sweat running down his forehead on to his glasses, Lehmann described the “human side” to being carved up in the public domain. “These are young men and I hope people will give them a second chance,” he said. “Their health and wellbeing is extremely important to us. I worry about the three guys immensely.”

Moments after Smith was read his fate by Sutherland on Tuesday morning, he hugged team-mates before walking from the hotel, dragging his suitcase behind him. At the airport he was greeted by another hostile media scrum, which will be replicated when he lands at Sydney on Thursday and fronts cameras for further interrogation.

Warner fared better, escaping scrutiny on his own way out of the country just minutes after Smith. Despite multiple reports from inside the camp that the deposed vice-captain had fallen foul of his team-mates for his actions, Lehmann said the “feeling is fine” towards him.

Lehmann said Smith’s sad goodbye was the “most difficult part” of a harrowing few days. “We’ve lost a great young man that’s again made a mistake,” he said. “We all love him, the public love him. He’s going to come back a better person, there’s no doubt about that.”

Turning to the unenviable task of preparing for the fourth and final Test of the series beginning at the Wanderers on Friday, Lehmann stated the obvious that the discombobulated XI will “not be 100 per centmentally right,” for the contest. Training was cancelled on Wednesday as replacement players Matthew Renshaw, Joe Burns and Glenn Maxwell flew to join the squad.

“We’re representing our country and we’ve got to start the ball rolling by playing the best cricket we possibly can,” Lehmann concluded of the side that will turn out under the leadership of Tim Paine, who becomes Australia’s 46th captain. But both in winning this Test and earning back so much lost ground, it may already be mission impossible.