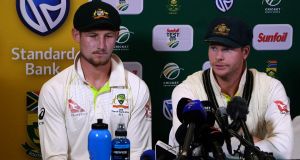 Australia captain Steve Smith has been suspended for one Test for his role in the ball-tampering scandal against South Africa, with guilty party Cameron Bancroft also sanctioned by the International Cricket Council.

The pair appeared before the media on Saturday to admit that they had conspired to illegally alter the condition of the match ball, with Bancroft using a piece of sticky tape containing grit from the pitch and Smith agreeing to the ploy after discussions with his “leadership group”.

Their actions, initially picked up by television cameras during the third Test in Cape Town, have shocked cricket fans all over the world — with a chorus of high-profile professionals deeming Smith’s position as skipper untenable and Australian Prime Minister Malcolm Turnbull even taking the time to condemn the incident.

Smith originally vowed to continue as captain and learn from the furore but it was confirmed on Sunday morning that both he and vice-captain David Warner had agreed to stand down from their posts for the remainder of the match at Newlands, leaving Tim Paine in charge.

Smith accepted a charge which related to a serious breach of the spirit of the game, earning a one-match suspension, losing 100 per cent of his match fee and picking up four demerit points. Although Bancroft was the directly guilty party his penalty was less severe, a nod to his junior role within the side.

He was fined 75 per cent of his match fee and hit with three demerit points. Unlike Smith, he is theoretically available to play the fourth Test against the Proteas in Johannesburg, though it would hardly be a surprise if he was removed from action by Cricket Australia.

Richardson delivered a strident assessment of recent events alongside the punishments.

“The decision made by the leadership group of the Australian team to act in this way is clearly contrary to the spirit of the game, risks causing significant damage to the integrity of the match, the players and the sport itself and is therefore ‘serious’ in nature.

“As captain, Steve Smith must take full responsibility for the actions of his players and it is appropriate that he be suspended. The game needs to have a hard look at itself. In recent weeks we have seen incidents of ugly sledging, send-offs, dissent against umpires’ decisions, a walk-off, ball-tampering and some ordinary off-field behaviour.

“The ICC needs to do more to prevent poor behaviour and better police the spirit of the game, defining more clearly what is expected of players and enforcing the regulations in a consistent fashion. In addition and most importantly member countries need to show more accountability for their teams’ conduct.

“Winning is important but not at the expense of the spirit of the game which is intrinsic and precious to the sport of cricket. We have to raise the bar across all areas.”

“We will continue to investigate this matter with the urgency that it demands,” he said.

“Cricket Australia and Australian cricket fans expect certain standards of conduct from cricketers representing our country, and on this occasion these standards have not been met.”

When asked if previous series — including the recent 4-0 Ashes win — would be reviewed for possible wrongdoing, a CA spokesman said: “We won’t be commenting on details of our investigation at this stage.”

There could be additional ramifications at domestic level, with Somerset director of cricket Andy Hurry stating the club would seek “all the facts” regarding Bancroft, the club’s 2018 overseas signing.

Smith also captains Indian Premier League franchise Rajasthan Royals, who said in a statement: “(We) await further instructions from BCCI, before we make any announcement.

“We at Rajasthan Royals will not tolerate any actions that are unfair by definition and bring disrepute to the game of cricket. Our zero tolerance policy applies to everyone in our team. Please bear with us.”

1 Ireland v Scotland: Doris’ day as Caelan set for first cap
2 Gary Lineker: ‘60 is just a number, 70 is the one to worry about’
3 Six Nations: Pundits, journalists and players have their say
4 Time for a rethink on Dublin Racing Festival
5 Youthful Arsenal secure passage into FA Cup fifth round
Real news has value SUBSCRIBE