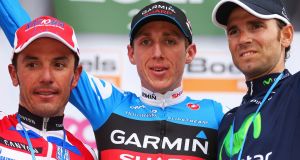 Six years after he triumphed in the Liège-Bastogne-Liège Classic, Dan Martin will start this year’s race hoping to once again contend for the title.

Martin’s run up to the race had been going well. Although he hasn’t yet won this year, he was second on the final stage and second overall in the recent Tour of the Basque Country, and said his form was on the up. However, he was a non-finisher in Wednesday’s Flèche Wallonne, a race he has previously taken second, second, third, fourth and sixth in.

Despite his disappointment on Wednesday, his team said that he still believes he can be a big contender this weekend. “It was a day on which Dan, as he said, had not good feelings since the beginning of the race,” a UAE Team Emirates spokesperson told The Irish Times on Thursday.

“Last year he also faced a difficult Flèche Wallone and then he was amongst the protagonists in Liège-Bastogne-Liège, before a puncture damaged his performance. So of course he’s confident for Sunday.”

However, if Martin is feeling good, there will be an additional complication this year. The finish of the race has been changed and in place of the hilly run in which was the platform for Martin’s victory in 2013 and his runner-up slot two years ago, the final kilometres are flatter.

Whatever way Sunday’s race goes, he is already part of a special group. Only two Irish riders have won major Classics: Martin took that 2013 victory plus the 2014 Il Lombardia, while Seán Kelly triumphed in both races as well as Milan-San Remo and Paris-Roubaix.

Further back, Shay Elliott won the Het Volk semi-Classic (now the Omloop Het Nieuwsblad) which, while not at the same level as the big Monuments, was a huge achievement at the time. Elliott was the trailblazer for Irish pro cycling and, in addition to that Het Volk success, also took the country’s first stage victories in the Tour de France, the Giro d’Italia and the Vuelta a Espana. He also wore the Tour’s yellow jersey and led the Vuelta a Espana.

Elliott’s Het Volk success happened 60 years ago this year. This success plus his other achievements will be remembered on May 12th when the Shay Elliott Memorial will be once again held. The race has a strong list of past winners, including Kelly, and takes in some of the toughest climbs in Co Wicklow.

The event has secured a new backer, Amundi Asset Management, and will hope to grow further in the coming years. If so, that would be fitting for Elliott, who was the first major Irish star in professional cycling.