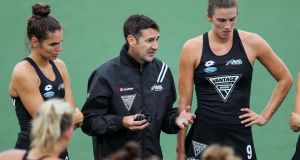 Sean Dancer has been named as the new head coach to the Ireland women’s team. Photograph: Simon Watts/Hockey NZ

A former Australian under-21 player, Dancer grew up near Shaws Bay before moving to Brisbane when he was 21. After leaving Australia for what he believed would be a one-year working holiday in Belgium in 2001 he ended up staying in Europe for seven seasons, becoming head coach for the Belgian U16 women’s squad in 2007.

Highlights of his role as assistant to the New Zealand women include a fourth place finish in Rio in 2016, along with securing Commonwealth gold in 2018. During that period the team maintained their ranking among the best in the world and never dropped outside sixth, where they are currently ranked. Ireland sit at eighth in the FIH world rankings.

It is difficult to escape the irony of the coaching movement between Ireland and New Zealand. Shaw stood down from his Irish position earlier this year to coach the New Zealand women’s national team, with Dancer leaving the assistant job in the New Zealand national team to take up the head coach role in Ireland.

Shaw led the women’s team to unprecedented success last summer, when they won an historical place in the final of the Women’s World Cup in London before being beaten by the Netherlands in the final.

In January of this year, Dancer took on the interim head coach role with New Zealand women following the departure of Mark Hager. Hager left to take up a coaching role with the Great Britain team when concerns were raised about a negative environment. Hager accidentally sent an email to the entire team, naming and shaming individual players for their performance and effort after finishing 11th at the World Cup.

“To be provided with the chance to lead a quality programme and team on the world stage is something that I have personally aspired to for a long period of time,” said Dancer. “I am grateful to Hockey Ireland for this opportunity and I’m excited to continue, and add to, the team’s world-class performances over the last 12 months.”

The new coach has 43 days before Hockey Ireland host the FIH Series Finals for women between June 8th and 16th, 2019 in Banbridge Hockey Club. This tournament is the first step to Olympic qualification for the senior women’s team. It will also be the first opportunity for the Irish public to watch the silver medallists play since the World Cup in 2018.