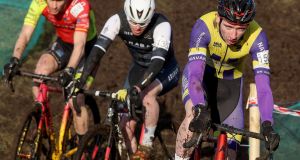 Sean Nolan: cyclocross and road rider will be a member of the EvoPro Racing cycling team in 2020. Photograph: Bryan Keane/Inpho

At least three promising young Irish riders will be amongst the line-up of the EvoPro Racing cycling team in 2020, with co-owner Morgan Fox confirming much of the squad on Thursday.

The future of the team had been up in the air in recent weeks, with an ongoing search for sponsorship meaning that it was uncertain whether it would continue. In the days before Christmas, Fox told The Irish Times that 11th hour meetings were taking place to try to ensure the team would not stop.

The team will meet a potential title sponsor on Friday and hopes to finalise their backing but, regardless, Fox said that the team has already attracted sufficient funds from a number of other companies to guarantee it continues.

He said the names of 10 of the riders for 2020, including a trio of Irish competitors. Returning from the 2019 line-up is Aaron Kearney, who agreed a new deal with the team on Thursday. He will be joined by 2018 Junior Tour of Ireland winner and twice national junior time trial champion Ben Walsh, plus cyclocross and road rider Seán Nolan.

The latter is the nephew of EvoPro co-owner PJ Nolan and, according to Fox, his signature is part of what the team intends will be a four-man UCI cyclo-cross squad competing in the winter months. Nolan will also ride some of the road race programme.

The initial team line-up will also include seven foreign competitors. Of those, four are returning from the 2019 squad. They are the sprinter Wouter Wippert and fellow Dutchman Peter Konig, Australia’s Cyrus Monk and the Briton Daniel Whitehouse.

The squad had a strong debut season, clocking up eight UCI victories. These successes included a stage win and overall honours in the New Zealand Cycle Classic, a stage win in the 2.1-ranked Tour of Hungary plus three stages in the similarly ranked Belgrade Banjaluka event.

Fox said the team was deliberately targeting a reduced race programme in 2020, saying that contesting too many events had diluted the squad’s strength.

“We will do fewer races to ensure there is no overlap,” he said. “Last year we had two separate squads on the road at times, and it meant we didn’t have our best riders together at every race.”

The team will begin racing at the GP Jean-Pierre Monseré in Belgium on March 8th.