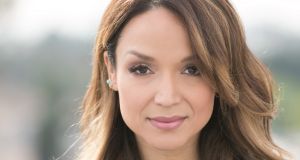 Mayte Garcia: “I was very open about saying I was going to write a book and he never said anything. I would never disrespect the father of my child.”

“There’s my future wife,” Prince said, when he saw Mayte Garcia standing outside his concert venue in 1989.

She was 16 years old, a hard-working dancer with $100,000 in her bank account and pushy stage parents. They had decided that Prince needed to see her dance. They made him a tape. He was enthralled. There was 15 years between them, but a strange friendship began. It was for her that he would write The Most Beautiful Girl in the World.

Garcia has now written a book about those years. “I started to write it before he passed,” she tells me.  “When he passed, I remember getting calls from all this press. There was nothing I could say in three minutes that’s gonna share anything that I want to share. I thought it would be perfect for it to come out on his anniversary. For years, I’ve remained quiet about our son and I’ve always wanted to clarify that and let people know that it was beautiful, and something that I cherish.”

For their whole relationship, she was not allowed to call him, only he could call her.

She describes a period of time at the beginning of their relationship that looks for all the world like wooing, but she insists it was not. She doesn’t think she was too young. “I think I was perfect,” she says laughing. ”And I’m not talking about a relationship kind of thing. His way of thinking was very useful and open for me. I wasn’t a regular 16-year-old. I had a work ethic, I had a discipline. We just got along great.”

She lived with her parents in Germany and Prince called her often, sent her letters and cassettes. The letters he sent her were trippy and playful: “Maybe we could fly away 2 Jupiter, I hear the food is good there . . . I miss u . . .” he wrote. Although it was “not that way, when I met him and we became friends, within weeks, there was this love that we both had for each other”.

Her parents were unfazed. They “witnessed the genius of him, so they were like, we’re not even going to question the fact that you could possibly work with this man. My mom was a stage mom so she was immediately thinking, we can put that in her resume”.

Garcia was never intimidated. “I laugh now because I remember when I went down to his hotel, I had my little video, and I’m showing it to him, all proud. And he’s sitting there, just smiling and looking at it. He was just so open and cool. Everybody that he works with, he’s made them feel special.”

Prince was a harsh taskmaster and always immaculate. At rehearsals, if you looked sloppy, you were sent home.

When she was 17, he flew her to Paisley Park to sing on a record. They ate pancakes and drove around listening to Diamonds and Pearls. At 18, he rented her an apartment nearby. She hung around waiting for his call. For their whole relationship, she was not allowed to call him, only he could call her. She was told she would dance on the Diamond and Pearls tour.

Prince was a harsh taskmaster and always immaculate. At rehearsals, if you looked sloppy, you were sent home. Garcia was struck by how Prince was found after his death, wearing a black shirt and pants on backwards. “This made no sense to me.”

One day, Prince saw some whipped cream and cookies at Garcia’s makeup station. They weren’t hers, but concerned about her dancer’s figure, he docked her wages. She says she was “crushed”.

I ask her if any of this felt controlling, which is my impression from the book. “I never felt like it was a control thing. As a boss, that’s just what he did. With the band if they messed up a song or messed up a cue, they’d get docked. I overcame it. You have to respect the fact that he’s the boss.”

After a relatively chaste tour, Prince’s seduction of Garcia was not exactly the stuff of his sexier lyrics. “I think it’s time,” he said to her.

“Time for what?” she replied.

“Time to get you on birth control.”

On February 9th, 1993, she wrote in her diary, “Not a virgin”. She refutes any notion that she was vulnerable. “I trusted this man. I loved this man. It was just a great connection between the two of us.”

Prince proposed in 1995. They talked about being soulmates and knowing each other from past lives. The wedding was a fantasy: half a million dollars of flowers, Paisley Park repainted in white and gold. Then Garcia became pregnant.

In 1996, Oprah interviewed Prince and Garcia only weeks after their baby Amir died. He was born with severe genetic defects and lived for only one week. They didn’t tell Oprah what just happened. “It’s all good, never mind what you hear,” Prince said.

“I can watch it now and see the beauty in it and see how he was really trying to be strong and be positive,” Garcia says,  “At the time I just remember thinking, just don’t say anything that’s gonna make me cry. And then Oprah, the way she turns to you, I was just like, oh God. He was my strength at that time. I had to do it for him. [Emancipation] was coming out on my birthday and my due date was a week before that and it was something that we expected. I had to be there.”

They were hopeful. “We were gonna try again. We were gonna bring this angel back.” Garcia got pregnant again but miscarried.

I was hoping he’d snap out of it for sure. I never thought that I wouldn’t be around.”

Prince dealt with the loss of his son in his own way. “He went back into the studio and came out with the Truth album. If you listen to Come Back, there’s a song that he wrote for our son. That was his way of communicating and coping.”

But their relationship became difficult. Was it Amir’s death or Prince’s new interest in becoming a Jehovah’s Witness, encouraged by Larry Graham of Sly and the Family Stone, that caused its deterioration? “I don’t think you can separate the two. My belief is when something happens so tragic in your life, you can become very vulnerable and you can be open to many things, and I’m not saying religion is bad – in the book I tried to be as loving as possible – but it is what it is.”

In 1998, Prince announced at a press conference that they had decided to “annul” their marriage; he detested contracts. “I remember being devastated, shocked.I know that he would go through little phases of certain things. I was hoping he’d snap out of it for sure. I never thought that I wouldn’t be around.”

There was a new woman in Paisley Park, Manuela Testolini, who would become Prince’s second wife. Garcia refers to a power balance several times in the book. Did she throw it off when she started fighting back?

Would you have gone back to him?

“Yes. I would’ve. There’s no one like him ever in my life and nobody will ever be like that.”

Garcia says in her book that some of the other women may act like his widows, but Prince is really with her.“We had two pregnancies, we had a son and I’m gonna feel that. He married me. But I respect like Sheila E and . . . all these women . . . I respect their love that they had for him and that he had for them.”

She has also struck up a friendship of sorts with Manuela in recent years. “We were the only two people who could understand what we went through.”

In the book, Garcia alludes to several episodes when he was foggy and “out of it”, and to “incredible” sums of money he carried on him. Did she say anything?  “No, because I didn’t think it was a problem. Now, I’ve been around, I’ve seen stuff and I’m like, no we’re gonna talk about this right now. But back then . . . If I would’ve seen a problem, I probably would’ve said something.”

She had wanted to visit him just before his death. “I heard that he wasn’t doing well in January and I was trying to decide if I wanted to take my daughter or not, and what state was he in, was he in the angry state or depressed state.”

Given how intent Prince was on privacy, how would he feel about this book? “I think he would smile and give me a hug. I was very open about saying I was going to write a book and he never said anything. I would never disrespect the father of my child. It’s my story, he’s my family, why can’t I share this?“

Garcia was 26 when their relationship ended. She had to learn to be “a grown-up woman without him”. She adopted a little girl, Gia. She runs a dog shelter, acts and teaches choreography.

She once said that her relationship with Prince ruined her for all others, but now she hopes to meet someone who is “loving and compassionate and loves animals and that is enough. I definitely won’t ever date another musician. That’s not happening. If anyone even picks up a guitar, I’m just gonna be like, put it down, put it down.”

The Most Beautiful: My Life with Prince by Mayte Garcia is published by Orion Books