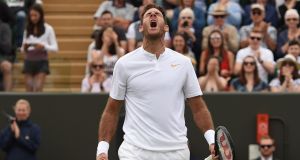 The tone more than the words of Juan Martin del Potro speaks of a player who is thankful to be facing the world number one player Rafa Nadal in the quarter-finals of Wimbledon on Wednesday.

Del Potro, who played his last 16 match over two days because of bad light on Monday, polished off Gilles Simon over a 70 minute mini shootout fourth set on Tuesday. In all the match took four hours 24 minutes. But del Potro is grateful to be playing, more especially to be facing Nadal.

In the dog eat dog world of professional tennis schadenfreude is never in short supply. A top 10 player on the injury heap is seen as opportunity and the gentle del Potro was at one time on the top of it.

Del Potro underwent left wrist surgery in 2014 and made his comeback in January 2015. He contested two events in 2015 before having further surgery on his left wrist. He made his return to the game after his third wrist injury in 2016 and here he is facing Nadal, not having played a warm up event on grass because of a groin injury.

“I’m dealing with all my emotions on court,” he explained after beating Simon. “I have been through a lot of problems few years ago. But now I’m thinking about the future, about my present as well.

“I don’t know if I’m better or not, a better player than few years ago. I’m number four in the world, which is my highest ranking in my career. That seems a good signal for me.

“I will see how is my level on grass when I will play against Rafa.”

How are you going to beat him the Argentinean was asked. “I don’t know he said smiling.” Most people would have given the same answer.

All eight players left in the draw are at least 27-years-old with the upstarts such as Nick Kyrgios, Grigor Dimitrov and Alexander Xzerev, this year defeated by a stomach upset, yet to make a serious dent in their aging crowns.

Federer faces a quarter-final of returning serves from South African Kevin Anderson. He may not be overly pleased about where he faces them.

For the first time since the Wimbledon quarter-finals of 2015 Federer is not playing on Centre Court. On the matter of tennis politics it was Novak Djokovic who spoke up about the inherent unfairness of Federer always being placed there.

His match against Anderson is first on number one court, which if he hasn’t played there for three years could be construed as disadvantageous for the defending champion.

Canadian Milos Raonic and American John Isner will end up playing a game of patience. Such matches between heavy servers bring their own dramatic tension. But like scrums in rugby, they are strictly for the purists.

Djokovic, back into that fluid movement and returning excellence, looked fresh and brimming. He faces Kei Nishikori and if pace means anything in these tournaments the Djokovic timing is sweet. And on Centre court.