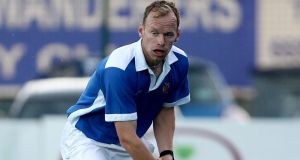 Kenny Carroll of Railway Union: made the final of the EuroHockey Indoor Club Challenge in Alanya in Turkey. Photograph: James Crombie/Inpho

Railway Union did enough to earn promotion for Ireland back up to the third tier of the EuroHockey Indoor Club Challenge competition thanks to a second place finish in Alanya, Turkey over the weekend.

The Sandymount club had been plunged into the bottom tier of European competition courtesy of Queen’s relegation last year when they controversially represented Ireland without having to play a national final due to a fixture mix-up.

As 2016 national champions, Railway took up the mantle as Irish representatives but their preparation was far from straightforward. They explored their options to bolster their panel, adding Dutchman Arjen van As, but only travelled with nine players of a potential 12-strong list with local political unrest, travel distance and cost proving a disincentive.

However, in eventual tournament most valuable players Kenny Carroll and Bruce Thompson, they had plenty of know-how of the European stage. They opened up with a 2-2 draw against Greek side Anavryta before beating Georgia’s Kutaisi 3-1 with Thompson and Tyron Kritzinger netting in the closing minutes.

A 2-1 success against Norway’s Mortensrud-Aker put Railway into a title decider with hosts Gaziantep Polis Gücü. The Turkish side proved too strong, but the Dublin side’s performances were enough to land a spot in the third tier for 2018 when Three Rock Rovers will take up the mantle.

On home turf, just two points continue to cover the top four who all won in the EY Hockey League on Saturday.

Lisnagarvey produced the most dramatic win, coming from 4-2 down to beat Pembroke 5-4 with Paul Gleghorne scoring the crucial goal.

Banbridge swept by Instonians 6-0 to remain equal top with Lisnagarvey but they do have a game in hand. Cork C of I beat UCD 3-1 while Three Rock Rovers remain unbeaten since the opening day of the season, seeing off Glenanne 3-1.