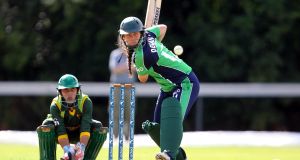 Ireland captain Laura Delany: is relishing the opportunity for the team to take their game to the next level. Photograph: Inpho

Ireland women are through to the Super Six phase of the Women’s World Cup Qualifiers in Sri Lanka after India’s convincing nine-wicket win against Zimbabwe confirmed third place in Group A for Ireland.

Reaching the Super Six stage means Ireland retain their ODI status, and are still in with a chance of making the World Cup Finals being held in England later this summer.

“Retention of our ODI status and qualification for the super 6s are so important for us,” said experienced opener Cecelia Joyce. “Since we play so little one-day cricket compared to teams ranked in the top 8, every opportunity to play more ODI matches is crucial.

“On top of that, if we can cause a couple of upsets and get through to the semi-finals to qualify for the World Cup, which I believe we are capable of doing, the opportunity to improve will then be there for us to kick on individually and as a team,” added the Merrion star.

Irish captain Laura Delany was clearly delighted at leading her side into the next stage, and is relishing the opportunity for the team to take their game to the next level.

“I am incredibly excited about reaching the next phase of the tournament,” said Delany. “We have played some really good cricket at times over the last week and are very aware that we will need to play our best cricket in these next three games to get the outcome we are after. Results “The results from the next three games could have a major impact on Irish women’s cricket going forward. Not only qualifying for the World Cup but also for the Women’s ICC Championship meaning a lot more international fixtures.

“We will be taking it one game at a time and I am confident that if we play with the belief that we had when we beat South Africa during the summer we will get the job done,” concluded the Leinster all-rounder.

For Ciara Metcalfe, reaching the next phase is the culmination of a lot of hard work from the talented squad.

“We are absolutely delighted to reach Super Six stage, and it’s all going according to plan - this group has worked hard and are ready for the business end of our trip,” said Metcalfe.

“We’ve played some good cricket and are keen to up our game a notch and get the job done, and qualify for the 50 over World Cup.”

Ireland are joined in the Super Sixes by India, Sri Lanka, South Africa, Pakistan and Bangladesh.

Their next game is on Wednesday when they face Bangladesh, before taking on Pakistan on Friday and South Africa on Sunday.