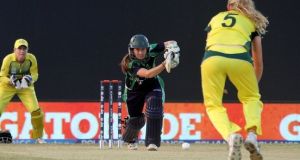 Isobel Joyce’s 24 helped Ireland to a below-par score of 144 as they were beaten by Bangladesh by seven wickets in Colombo. Photograph: Inpho/Barry Chambers

Ireland Women must win their remaining two Super Six matches to keep alive their dream of World Cup qualification after they slipped to a seven-wicket defeat against Bangladesh.

The Irish batting failed to fire as they were dismissed for a below-par 144 having been put in to bat.

The Girls In Green were dealt an early double blow as Cecelia Joyce (3) and in-form Kim Garth (0) both went cheaply.

Meg Kendal returned from her hamstring injury to make 16, sharing in a third wicket stand of 45 with Clare Shillington, who struck four boundaries and cleared the ropes twice in an entertaining 37 from 36 balls.

Both fell in quick succession and it was left to skipper Laura Delany (37) and Isobel Joyce (24) to rebuild the innings with a stand of 44.

Having reached 106 for 4 with 19 overs remaining, Ireland looked set for a total approaching 200, however the innings faltered in the final third, as they slumped to 144 all out.

Ireland needed quick wickets in the Bangladesh chase, but their attack was blunted by a steady opening stand of 40 between Sharmin Sultana (22) and Sharmin Akhter.

Gaby Lewis (1-31) dismissed Sultana, and when Isobel Joyce ran out Islam for 2, Ireland were back in the contest at 52 for 2.

However Akhter hit a fine half century from 86 balls (5 fours), adding 53 with Morgana Hoque to ensure Bangladesh quickly regained control.

Although Akhter (52) was dismissed by Ciara Metcalfe (1-33), by that stage just 39 were needed, and Hoque (34*) in conjunction with Rumana Ahmed (24*) steered their side safely home with no further alarms.

Ireland are next in action when they face Pakistan on Friday, before taking on South Africa on Sunday.