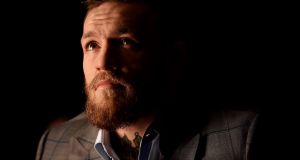 Conor McGregor is in Las Vegas as talks continue on a potential fight against Floyd Mayweather. Photograph: Getty Images

Mayweather, who retired from the ring undefeated, told ESPN’s Stephen A Smith that a fight between the two is “getting very, very close”. ESPN also reported that McGregor had arrived in Las Vegas, Mayweather’s home town, on Monday.

The rumours were given credibility by the Nevada State Athletic Commission chairman, Anthony Marnell, who said on Tuesday talks between the two men had taken place.

“There is a lot of real stuff going on,” Marnell said. “It still seems like a long shot, but when there is a lot of money involved, people tend to figure it out. There are a lot of cooks in the kitchen, but I’m not sure if we’re going to eat.

“The Nevada Athletic Commission, in my experience, has always been well-briefed by all parties on an event or potential event that may take place in Las Vegas. We are aware of conversations and information that has been disclosed and not disclosed in the media. Whether these conversations will get to a point that a fight happens, I can’t tell you.”

Any fight would almost certainly be under boxing rules and McGregor applied for a boxing licence last year. While Mayweather has not fought since September 2015, McGregor is the current UFC lightweight champion and must balance any potential fight with Mayweather with his contractual obligations to UFC.

However, last month McGregor said he believes his next fight will be with the American. “The next time I fight, I will step through the ropes with . . . gloves on,” McGregor said. “I got my eyes on one thing and that’s Floyd Mayweather.”

The UFC president, Dana White, said last week that McGregor will not be able to dictate his future so easily. “It is what it is now,” White told ESPN. “He came out and said, ‘I can do this without them.’ I guarantee you, he can’t do it without us. What I then said was, ‘I’ve always been respectful of Conor, the things he wants to do and everything else. If he wants to go down that road it will be an epic fall’. Everybody knows exactly what that means.”

McGregor has said he wants $100 million for the fight, a similar amount to the sum Mayweather made when he fought Manny Pacquiao in May 2015. So far, the only concrete offer has come from White, who offered both men $25 million, an offer that led Mayweather to describe the UFC president as a “f**king comedian.”