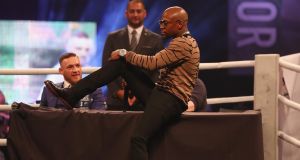 As Floyd Mayweather Jnr and Conor McGregor engaged in the fourth and final leg of their puerile, inter-continental swear-off in London last Friday night, Audie Attar stood silent sentry in a corner of the ring. He wore the type of wry smirk you might expect from a sharp-suited character with a Master’s in Dispute Resolution, watching two grown men deploy race-baiting and homophobia to amplify the ersatz hostility and to shamelessly flog tickets.

That the 36-year-old was the only member of McGregor’s personal backroom team inside the ropes that night indicates his standing in the set-up. Attar is the Dubliner’s manager, the soft-spoken character who has steered him to a fortune that, we are constantly told, may soon exceed $100m.

Still, his bit-part role in that squalid touring sideshow pockmarked by so much racism, bigotry and sexism is surprising given his own remarkable biography. Born in Baghdad in 1980, Attar was two years old when his parents brought him to live in southern California, and the family were holidaying back in Iraq when President George HW Bush first tried to put manners on Saddam Hussein nearly a decade later. Even when they managed to get out of danger and back to the United States, he suddenly found himself the butt of anti-Islamic jibes and insults from peers who didn’t grasp the complex make-up of his native country.

Attar spoke eloquently about the difficulties, knowledgably quoting the Koran, and citing the disturbing case of his mother’s friend, a woman dragged from a car in Fontana and beaten because she was wearing a veil

“I didn’t understand why kids said these things,” said Attar. “It hurt to have people not understand how it feels to be the only person at school from a certain background.”

The combat skills he honed reacting to some of those taunts later found a more positive outlet as a linebacker on the grid-iron field. He was three years into a football scholarship at UCLA when the 9/11 attacks happened. A couple of weeks later, the Los Angeles Times interviewed him about what it was like to be a Muslim in America during that troubled spell. Attar spoke eloquently about the difficulties, knowledgably quoting the Koran, and citing the disturbing case of his mother’s friend, a woman dragged from a car in Fontana and beaten because she was wearing a veil.

“There wasn’t much racial tension toward Arabs until this happened,” said Attar. “Now I’m afraid the number of people harmed because of this tragedy will escalate. America is not about being white. It’s the land of the free where everyone comes together to fulfill their dreams.”

The very type of lucid and progressive quote so markedly absent in the slimey dialogue he helped foist upon the world from four different cities last week. When you consider his own life experience, it’s all the more difficult to reconcile this figure centrally involved in the tawdriest promotion in sports history with that conscientious young man pleading for tolerance.

Nine months after the planes flew into the World Trade Center, he was dismissed from UCLA for his involvement in an off-campus fight that had religious overtones. When he bumped into a customer in a Westwood bar who responded with an anti-Islamic slur, Attar struck the man. It was not his first violent violation of team rules and he was forced to play out his last year of college ball eligibility in remote and much less glamorous Idaho State.

“They say you’ve got to learn from your mistakes,” said Attar of the incident, “so that played a part in who I decided to become, no question.”

It seems odd that a young man who has been on the wrong end of prejudice and ignorance, somebody once worried the Arabic tattoo on his shoulder commemorating his deceased brother Eddie might provoke attacks, now smiles benignly at McGregor’s racist and sexist dumpster-diving. At least, it seems odd until you trace the parallel trajectory of both their careers and realise how many millions they’ve made each other.

After serving his time at various agencies, Attar established Paradigm Sports Management in 2009. What began as a bespoke outfit catering to a small roster of NFL players started to take off once Attar identified the burgeoning MMA scene as an underserved market. That growth intensified when a friend (also called McGregor) alerted him to the emerging Dubliner ahead of his UFC debut in Sweden in 2013. Somebody who came into the business wanting “to master the science of marketing and brand-building” had found the perfect vehicle to do just that.

The arrangement has been mutually beneficial. A few weeks before Attar called, McGregor nearly signed with an Irish agent offering him €1000 per month and demanding around 25 per cent of his earnings in the octagon. The other day, Attar boasted that the endorsement deals from the August 26th bout alone could end up being more lucrative than the purse. It’s worth noting too that Paradigm also claim the company’s high-profile association with McGregor has been good for business, attracting new clients from, among other sports, the NBA and soccer.

After clocking up 12,000 miles with the circus labelled “MayMac”, Attar finally got home to California last Sunday. Then, he took his wife, his two daughters and his mother to the Orange County Fair in Costa Mesa. An American summer ritual, a downhome, wholesome day out for all the family. Where else would you go after a week listening to your cash cow repeatedly talk of bitches and hoes while claiming to be black from the belly-button down?