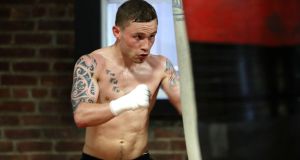 Barry McGuigan was on his toes in Church Street Gym. Familiar faces of the fight game milled around the basement sweatbox in Lower Manhattan.

McGuigan though still bounces around like he could easily go a few rounds, a boxing Benjamin Button, 55 now but you could shave 10 or 15 years off that number and he’d pass for it.

It’s 30 years since McGuigan surrendered the WBA featherweight title to Steve Cruz under the burning sun of Las Vegas. Tonight in Brooklyn, the same piece of silverware comes spinning back into Team Cyclone’s path.

Carl Frampton, McGuigan’s protege and long-since adopted member of the clan, makes his Stateside headline debut with the most daunting date of his professional life – a showdown with three-weight world champion Leo Santa Cruz.

The Jackal is making the step up to featherweight for the first time on a night of many firsts at the Barclays Centre. Most notable of all is that this will be the only time in his professional career that Frampton has started a fight as underdog.

Those divisions that Santa Cruz has tamed provide three reasons for the Mexican’s favouritism. There are a fair few more. But back in Church St this week, McGuigan was bullish to the point of bristling. Questions that began with possiblys or potentiallys were met with swift response.

While the most outwardly enthusiastic about Frampton’s chances of becoming the first Irish man to become a two-weight world champion since Steve Collins, McGuigan senior’s words have been mirrored in the body language of both his fighter and son Shane, Frampton’s coach, all week in New York after a productive month-long camp in the north of the city.

Frampton was stung on his first visit Stateside last summer when he threatened to melt down early in the heat of El Paso, being downed twice in the first round before recovering to dominate the unheralded Alejandro Gonzalez Jr. Lessons both swift and harsh were learned.

The 29-year-old bounced back in some style earlier in the year to unify the super bantamweight division with victory over Scott Quigg in Manchester. The step up to a higher weight, which for some time has made physiological sense, now made financial sense too once the opportunity to lock horns with one of highest regarded fighters Stateside came into view.

“This fight was so hard to turn down,” said Frampton, “You get offered a chance to become a two-weight world champion against a great fighter like Santa Cruz, and to be honest, there’s a lot of money involved. It’s a business.”

Once they do get down to business tonight, fireworks are expected. Santa Cruz is a puncher on the pneumatic side of prolific, reeling off as many as 150 shots a round.

Once things settle, he’s likely to come looking for the Jackal. With his height and significant eight-inch reach advantage, he’ll be able to find him.

“Carl Frampton is a great fighter, he’s undefeated like I am and we’ve both come here hungry,” said Santa Cruz, based in California and also fighting in New York for the first time.

Frampton’s ability to adapt and still inflict on the counter is one of his greatest strengths. With patience and persistence, he’ll likely find openings here. The extra four pounds have visibly suited him. Should they translate to added power, Santa Cruz’s ability to take a punch could be tested like never before.

For these reasons and more, the Brooklyn bout has been spoken of Stateside as having fight-of-the-year potential.

“I wanted this fight when it was at 122, super bantamweight. But if I’m being honest, I think it will suit me better at 126,” said Frampton.