Carl Frampton: ‘He won the fight fair and square’ 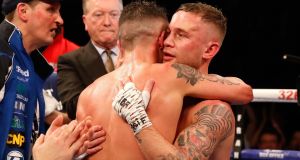 Josh Warrington and Carl Frampton engaged in one of the contenders for fight of the year on Saturday night, as the latter retained his IBF featherweight title at the Manchester Arena.

Warrington was awarded a unanimous decision by two scores of 116-112 and one of 116-113 in the first defence of his world title as he extended his unbeaten professional record to 28-0.

He said to BBC Radio 5 live: “If you had said last year that I would’ve beaten Lee Selby and Carl Frampton back-to-back, people would’ve laughed in your face.

“I think I earned his respect as soon as I hit him but it was always about controlling the pace. I’ve always had self-belief and I’ve had it for a long time.

“I don’t feel pressure now once I get into a building, because I get this massive energy from somewhere. Once I’m in there, I feel I can’t be beaten.”

Former two-weight world champion Frampton slipped to 26-2, and he said on BT Sport: “He won the fight fair and square. I came here, had trained hard and was sharp but the better man won and I hope he goes on to unify the division.

“It was just not my night, I was fit and strong but Josh was fitter and stronger. I was hurt a number of times.”

1 ‘A radical departure’: Who are CVC and what are their plans for rugby?
2 Ken Early: Why international football is fading into obscurity
3 Colin Kaepernick’s exile is too fresh for NFL to speak out on US protests
4 Connell losing touch with club championship is real tragedy of Normal People
5 GUI release protocols for return to club competitions
Real news has value SUBSCRIBE