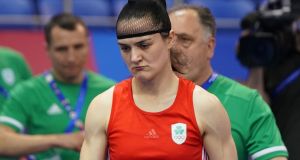 Kellie Harrington is part of the 13-strong Irish team at the Olympic qualifiers in London. Photo: Soenar Chamid/Inpho

The ‘C’ word has always been a more aggressive, a more offensive word than the ‘F’ word. The ‘C’ word definitely makes the point a lot more forcefully, while the ‘F’ word has become just another throw away verb.

Nobody really takes any notice of the ‘F’ word anymore. It’s almost every day quaint. The ‘C’ word. Now that is a different order of magnitude.

It’s the ‘C’ word that made sport on television quite a novelty this weekend. The coronavirus. The ‘C’ word spooked sport more than the kindly killer flu, Sars or ebola ever did. The epidemiologist boffins even went and added a sci-fi numeral to the back end of Covid. There it sits, a sinister, split personality Covid-19.

Were there 18 Covids before this virus? Still, it has the world of television sport in a tangle.

Since Cheltenham officials met with a suite of pandemic experts, the broadcasting partners and sponsors ... and proceeded as planned, we kind of knew. We kind of understood that equine flu and yards in Newmarket with spluttering horses had a higher price than dry coughing humans on their way home from the Cotswolds.

From that parallel world, rugby under the WRU and SRU felt right at home playing on in the Six Nations Championship. In both instances they didn’t get the message and then did get the message. That’s been the story of Covid-19, not getting it and then getting it.

From Friday morning’s insistence by the Welsh Rugby Union that the game would go ahead it took less than five hours for the television sporting schedules to fold.

What’s there not to be afraid of from players smearing each other with blood, sweat and saliva over 80 minutes? It was hard to keep up. By the time the weekend came along sport everywhere had flat lined.

Virgin One offered Wales v Ireland in the 2009 Six Nations. There was Paul O’Connell. There was Jerry Flannery. There was Tommy Bowe scoring and Tomas O’Leary and there was Brian O’Driscoll and Luke Fitzgerald making us all feel older than we should in self-isolation.

But amateur boxing. Amateur boxing has always been a renegade sport. It has always had its own way of doing things from disqualifying the judges at the Rio Olympic Games to electing presidents who were not always presidential. The last one happened to be on the US Treasury’s list of undesirables.

The sport now has a kind of emergency International Olympic Committee (IOC) cabinet called the IOC Task Force running it until it gets it’s governance and finances in order.

So if you turned to the perfect social distancing device, your laptop, the streaming ‘C’ word would have to be the Copper Box, where you could watch the Olympic boxing Qualifiers merrily progressing live and without as much as a mention of Covid-19.

The Copper Box in Queen Elizabeth Park with a capacity of 7,481 and in excess of 350 boxers from 40 countries and squadrons of officials did what rugby failed to do and defiantly broke wind in the face of science. And if you think rugby players smear organic matter around the place, you should see the boxers go at it.

Third match up on Saturday in the 57 kg class and Czech boxer Kevin Godola faced Francesco Maietta from ‘locked down’ Italy. The back drop in the arena was dark so the number of spectators was difficult to see.

The boxers, they were keeping their distance in the ring. That’s not to say there was no face time going on. And so it went as boxing goes; the corner man sticking his hand in Maietta’s mouth at the end to haul out his mouth guard; the boxers shaking hands; the referee taking both boxers by the hand and raising the one belonging to Godola.

And then it began happening all over again in a matter of minutes.

Two rings with an afternoon session and an evening session running for 11 days, men and women and 77 qualification places available for an Olympic event in Tokyo which may not happen, sailed silently under the radar.

Ireland have a 13-person team in London. A touch of irony there. The Irish boxing squad cut short their training camp in Assisi, Italy due to the virus outbreak. Among the hopefuls are 2018 world lightweight champion, Kellie Harrington as well as current European featherweight and middleweight champions Kurt Walker and Aoife O’Rourke.

There’s brother and sister duo Aidan and Michaela Walsh in the welterweight and featherweight categories and there is Rio 2016 Olympian flyweight Brendan Irvine.

Believe it, their blood and snot are propelled for yards out of the ring onto the judges and photographers. Good luck all. And don’t mention the ‘C’ word.