Ben Stokes: ‘It’s one of the two best feelings I’ve ever felt on a cricket pitch’ 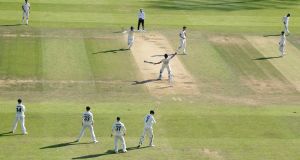 Ben Stokes was left struggling to take it all in after his incredible unbeaten 135 carried England to a most remarkable one-wicket victory over Australia at Headingley to level the Ashes at 1-1.

England, bowled out for 67 in their first innings, were rocking at 286 for nine but completed a record run chase of 359 thanks to the heroics of Stokes.

“Today was incredible,” Stokes said. “I don’t quite know what to say. It hasn’t sunk in yet.”

Stokes, already a hero for his role in England’s World Cup victory earlier in the summer, said the winning moment was one of his best two feelings on a cricket pitch.

“It’s one I’ll never forget,” he said on Sky Sports. “I’ve got to try and take it all in. I’m not sure it’ll ever happen again. It’s one of the two best feelings I’ve ever felt on a cricket pitch.”

“We had to win this game to stay in the Ashes and we managed to do it. We’ve got to move on now. We’ve managed to keep our hopes alive of doing the double and we can take a lot of momentum.

“It’s nice to get a break now and recharge the batteries and hopefully hit the ground running again in Manchester.”

“We said at the start of the day, ‘we just have to believe’ and while two people are alive and breathing, we have a chance,” he said.

“We’ve seen some freakish things already this summer in the World Cup but I didn’t think we’d see something similar in this series.

“That was just incredible. To try and sum that up in words is pretty much impossible. Outrageous batting.”

Root also paid tribute to Jack Leach’s performance as the spinner faced 17 balls, scoring only one run but playing a vital role.

“The fact that he is so calm to be able to take off his glasses and clean them between balls, he’s very much in the moment and he was a big part of that partnership,” Root said.

“It takes two guys, regardless of how big a role you play, you’ve both got to be in it and he certainly did a fantastic job. I’m still trying to get my head around it. Amazing.”

Leach said: “It was a very special feeling. Stokesy was unbelievable, like nothing I’ve ever seen before.

“The crowd was insane and to be part of that at the end was an incredible feeling.”

While England celebrated, Australia had to ponder how they let the game get away from them.

“It’s hard to take, losing that from that position but you tip your hat sometimes,” Australia captain Tim Paine said.

“Ben Stokes played an unbelievable innings and in the end he was too good for us.

“It was probably the best Test innings I’ve seen and the rest of the team thought the same thing. It was an unbelievable innings.”

Victory would have seen Australia retain the Ashes but Paine pointed out they still have two more opportunities left.

“It’s a test of character, but as I’ve just said to the boys now, it’s not the end of the world. It’s one game of cricket and we’re here to win the series.”

Michael Walker: Pressure mounts on Barcelona to stop slide 08:00
Sene Naoupu turning mind back to rugby after health scare 06:00
Tokyo ’64 Revisited: lifelong tales of Olympic experience 06:00
Sporting Cathedrals: Semple Stadium, the very centre of the hurling universe 06:00
Rubber about to meet the road as counties weigh up financial hit 06:00
Here is your handy guide to sport on television this week