Belfield hockey pitch no longer up to international standard 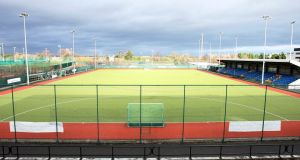 The National Hockey Stadium in UCD, Belfield, is in need of an upgrade. Photograph: Donall Farmer/Inpho.

Hockey Ireland and UCD are in something of a stand-off with regards to how to proceed with the synthetic surface hockey pitch in Belfield.

The pitch needs investment in order to re-lay the surface and bring it up to International Hockey Federation (FIH) spec for international matches.

Belfield has been the National Hockey Stadium for the last number of years but recently a World Series tournament was awarded to Stormont in Belfast.

Because of the current condition of the pitch international hockey matches cannot be played on it as it does not reach the exacting standards set out by the FIH for the staging of senior international events.

“The pitch has been in use for over a decade and has played host to countless memorable matches, both at club and international level,” said a Hockey Ireland spokesperson.

“However, it is now at the end of its usable life for international fixtures and there are more suitable pitches available around Ireland. We’re in discussion with UCD as to how we can go forward.”

It is no secret that Hockey Ireland is financially strapped following last year’s campaigns by the men’s and women’s national teams, which ended in the Rio Olympic Games for the men.

The Hockey Ireland offices are currently located within the UCD grounds close to the Leinster rugby offices with the UCD synthetic pitch the only one in Dublin with a covered stand capable of holding a few hundred people.

International matches were staged last summer in Monkstown’s pitch at Rathdown School prior to Rio. The Monkstown pitch is top of the range but there is no covered seating for spectators.

UCD will play Cork C of I on the Belfield pitch on Saturday as the EY Hockey League resumes. C of I have got themselves into third place in the league behind Banbridge and Lisnagarvey with the students now third from the bottom.

Leaders Lisnagarvey face Dublin side Pembroke with fancied Banbridge in second place taking a trip north to Shawsbridge where they play Instonians.