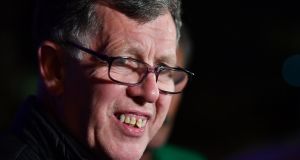 Willie O’Brien: worked closely with Pat Hickey and has been involved with the OCI for 21 years. Photograph: Brendan Moran/Sportsfile/Getty

Since 1970, William O’Brien Motors, hidden somewhat out of view at the Croke Park Industrial Estate in Dublin, have been quietly earning a reputation for the reliable service and repair of cars and light goods vehicles.

Now the man who runs that business – better known in sporting circles as Willie O’Brien – has put himself under the glaring spotlight as one of the three candidates to succeed Pat Hickey as president of the Olympic Council of Ireland (OCI).

For someone previously content working in the background – in both roles – O’Brien hasn’t yet looked comfortable as a potential OCI leader, his interview with Saturday Sport on RTÉ radio last month hardly covering him in any glory. Still, there are those who say he is suitably qualified.

Married, with one child, and living in Drumcondra, the 68-year-old presents himself as an equally reliable servant to the OCI. He has been in both the trenches and the tanks of Olympic warfare, fighting initially for greater recognition of his own sport, archery, that most ancient albeit now largely underground of Olympic events.

He has also represented the OCI at the Court of Arbitration for Sport (CAS), and served on various sub-committees of the European Olympic Committee.

Throughout that time he has also remained a Hickey loyalist. He was elected OCI vice-president in 2012, Hickey essentially anointing him as his successor, long before the Rio ticket-touting controversy erupted. So too has he stood by Hickey since, stating their close ties has nothing “to do with my presidency going forward” while also declaring that Hickey “is innocent until proven guilty”.

While Hickey has often courted controversy with certain national federations (standing off, for example, against BLE, now Athletics Ireland, in the infamous “gear row” that marred the 1996 Olympics in Atlanta), O’Brien has always managed to steer himself clear.

What’s been impossible to avoid, however, is the glaring conflict with one of the key recommendations of the Deloitte report which examined the association’s governance in the aftermath of Rio, which was unambiguous in limiting terms for all executive committee members to “two four-year terms”.

O’Brien, now 21 years with the OCI, agreed with the recommendations, but said: “In order to implement them, I have to stay on, and work on implementing them.”

He also admitted he had flown business class to Rio, while athletes were only afforded economy. Although business, he says, must also change.