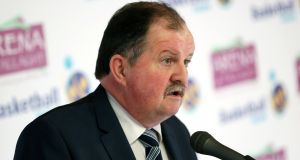 Bernard O’Byrne: “Both of the other candidates for this position belong to the old guard, Willie O’Brien for over 20 years and Sarah Keane for over two years.” Photograph: Cathal Noonan/Inpho

A lifelong sports administrator in GAA, soccer and basketball, 67-year-old Bernard O’Byrne is best known for his time with the Football Association of Ireland (FAI) where he wore a number of hats.

Over the span of years between 1995 and 1998 he was FAI chief security officer, FAI treasurer and the FAI CEO. In 2011 he was appointed CEO of Basketball Ireland, where he is still in office.

But he is best remembered as a central figure in the tumultuous period after 1996, which brought him into conflict with the current FAI chief executive John Delaney. Ironically, Delaney was tipped as a future OCI president by the outgoing president Pat Hickey until the football chief’s resignation in the wake of the Rio ticketing scandal.

As CEO of the FAI in 1996 O’Byrne championed the Eircom Park project, a proposed purpose-built stadium in Saggart, that was eventually brought down by opposition from within the association.

Following his departure he signed a confidentiality agreement and obtained a six-figure sum from the FAI.

In basketball he has been perceived to have done an excellent job. When he took over in 2011, the sport was in terrible shape both on the court and financially.

That situation has been turned around and last November the sport announced Pete Strickland as its new Irish senior men’s head coach in a much improved environment.

O’Byrne would be perceived to be the outsider among the three candidates and as someone who is not and has not been an OCI executive member, unlike his current rivals.

A member of Mensa and an Italian speaker, O’Byrne has set out his agenda as one of change within the OCI and has distanced himself from what may now be perceived to be a toxic brand. He is also a robust campaigner and has been unafraid to express his view.

“Both of the other candidates for this position belong to the old guard, Willie O’Brien for over 20 years and Sarah Keane for over two years” said O’Byrne in his manifesto.