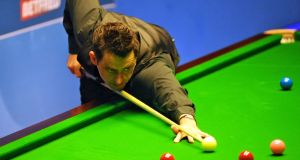 Ronnie O’Sullivan insisted he was “really not that bothered” about winning the Betfred World Championship for a sixth time after he reached the quarter-finals on Saturday with a 13-7 victory over Shaun Murphy.

O’Sullivan fired two centuries and nine further breaks over 50 as he secured a spot in the last eight, where he was joined by John Higgins, who beat Mark Allen 13-9, and Ding Junhui, a 13-12 victor over Liang Wenbo.

The performance from O’Sullivan, who faces Ding next, showed no sense of a hangover from the controversy he sparked with criticism of Barry Hearn and snooker’s governing authorities last Sunday.

He has refused to answer further questions on the dispute over disciplinary issues, leaving it in the hands of lawyers, after accusing Hearn and World Snooker of ”bullying” him.

When O’Sullivan was pressed after the Murphy win about how much he wants a sixth world title, which would take him level with Steve Davis, his attitude was phlegmatic.

“I’m really not that bothered. I know it might sound crazy,” he said in a press conference.

“At the end of it, if I was to win it I’d be sitting here saying it was a great, great feeling, but I’ve had that feeling five times before.

“It’s nice for a few days, a week or so, but after that you think, ‘Is it worth putting 365 days of blood, sweat and tears into hopefully winning the world title, to get that feeling?’

“I’ve never been driven by records and titles and being the greatest player on the planet.”

O’Sullivan also compared his lifestyle, which now involves television work and snooker exhibitions across Europe, to that of a touring rock star.

”I look at myself like a band or a singer nowadays. But I’m not confident of writing brilliant albums every year,” he said.

”I haven’t had the greatest of seasons — I haven’t written a great album this year — but it hasn’t been a bad year.

”I don’t see that I need to write a great album any more, I just need to be a supporting act. I don’t mind letting the other guys write the good albums.”

Asked if he had become the Rolling Stones of the snooker circuit, O’Sullivan said: ”The Rolling Stones are still the big act, they don’t support anybody. Maybe I’m a bit like James Blunt. He seems a pretty cool dude.”

Northern Irishman Allen saw a 5-3 overnight lead over Higgins swiftly wiped out on Saturday as he finished their morning session 9-7 in arrears.

He immediately made it 9-8 at the start of the final session and looked set to win the next frame until he got a kick when attempting to pot a red to a top corner on 58.

Higgins went on to win that frame and the next with a run of 120, and after Allen pulled one back, Scotland’s four-time world champion wrapped things up to set up a meeting with Kyren Wilson.

Ding had to fight all the way to beat fellow Chinese player Liang after surrendering a two-frame lead to trail 10-9 after the first three frames of the final session.

Ding took the 20th frame and then levelled twice more from being 11-10 and 12-11 down before coming through to win, taking the match into a decider with a fine 132 and then clinching it with a break of 70.

Reigning champion Mark Selby emerged from the first session of his second-round clash with a 6-2 lead over China’s Xiao Guodong.

And that was also the score by which Judd Trump’s conqueror Rory McLeod trailed former semi-finalist Stephen Maguire after one session.