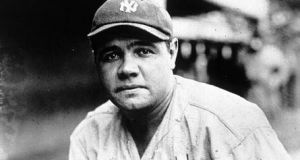 Babe Ruth: he hit 714 home runs over his 22-year career, 15 of those years with the Yankees. Photograph: Getty Images

A Babe Ruth jersey, dating back to 1928-30, has sold for a record $5.64 million at auction. The sale of the New York Yankees jersey beat the $4.4 million previously paid for one he wore in 1920, according to Hunt Auctions. The jersey – gray with “Yankees” emblazoned across the chest – was one of more than 400 pieces of Ruth memorabilia supplied by his family and some collectors for the auction, which was held on Saturday at Yankee Stadium.

The seller of the jersey was anonymous, ABC News reported. The name of the buyer was not revealed.

This is the description of the jersey from the Hunt Auctions catalog: “...let there be no doubt that the pinnacle of all Babe Ruth items, and sports memorabilia in general, is a jersey as one donned by the Bambino himself. To the best of our knowledge, there are six Babe Ruth New York Yankees professional model jerseys of merit known to exist. That includes both private and institutional collections such as the National Baseball Hall of Fame...Within that limited population we are honored to present the only specimen dating to the golden era of Babe’s storied career during the late 1920s period.”