Ireland hopes suffer after defeat to Egypt in France 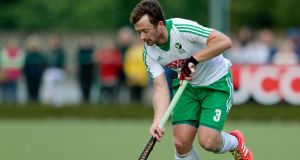 John Jackson opened the scoring for Ireland in the defeat to Egypt. Photograph: James Crombie/Inpho

Ireland’s chances of topping their men’s FIH Series Finals group suffered a big blow as they succumbed to world number 20 side Egypt in Le Touquet, France on Sunday.

Alexander Cox’s side struggled to create enough clear-cut chances against a powerful, direct Egyptian side who were decent value for the win.

The Green Machine made a decent start and went in front from their second penalty corner when Shane O’Donoghue fired in a reverse-stick shot that John Jackson tipped in.

But Egypt are a wily outfit and their hard running down the middle soon started bearing fruit. They were back on terms seven minutes before half-time via Mohamed Adel’s drag-flick and but for some sharp David Harte work in the third quarter would have been ahead sooner.

Michael Robson just missed out from an O’Donoghue cross from the pick of Ireland’s fleeting attacks but, too often, crash balls were easily picked off at the edge of the circle.

Egypt, meanwhile, went in front early in the fourth quarter, cutting in from the left to set up Ahmed Abd Elhakim who flipped a neat finish over Harte.

In tandem with their 4-2 win on Saturday, it leaves Ireland in third place in the group after two games. They should advance to the next phase with Singapore – 36th in the world compared to Ireland’s ranking of 11 – on Tuesday’s agenda but it looks more likely to be to the quarter-finals rather than the direct route to the semis.