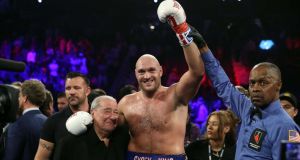 Tyson Fury did exactly what he was supposed to do against an overmatched opponent: he wasted no time and he closed the show.

The 30-year-old from Manchester stopped the unheralded Tom Schwarz in the second round on Saturday night before a crowd of 9,012 at the MGM Grand Garden Arena, delivering his fastest win in nearly a decade on his Las Vegas debut and setting the stage for a showdown with Deontay Wilder early next year in a rematch of their December classic.

This one, a showcase fight in every sense, wasn’t quite as dramatic.

Fury (28-0-1, 20 KOs) peppered his opponent with jabs from the opening bell as Schwarz pressed forward in an attempt to cut off the ring. He appeared relaxed and comfortable fighting off the back foot, landing on the slow-moving German at will and starting to put the right hand behind it by the end of the round.

Switching to a southpaw stance to start the second, Fury wobbled Schwarz with an uppercut early. The wounded fighter immediately opened up with a sense of urgency and cornered Fury, but the big man adroitly escaped and fired back a blinding combination. Moments later Schwarz backed his opponent along the ropes again and unloaded at least a dozen punches, but the 6ft 9in Fury managed to avoid nearly every blow with stylish upper body movement.

Schwarz (24-1, 18 KOs) was bleeding badly from a busted nose when he was dropped to a knee by a thudding left hand near the end of the round. He beat the count but the outcome was a formality from there as Fury rained down 20 uninterrupted shots, prompting referee Kenny Bayless to intervene with six seconds left in the round.

“I used the jab,” said Fury, who landed 45 of 158 punches (28 per cent), compared to six of 30 for Schwarz (20 per cent). “I was slipping with my hands down and sliding shifted to southpaw and caught him with a straight left. It was a good shot it would have put anybody away.”

The Halle native, who went off as a 12-1 underdog in only his third fight outside Germany and first in the United States, was somehow ranked No 2 by the World Boxing Association despite a resume thin on recognisable names. He was an unknown quantity entering Saturday’s fight, but quickly was shown to be out of his depth against Fury, who made his ringwalk clad in star-spangled regalia to the James Brown single Living in America.

It marked Fury’s fastest victory since a first-round knockout of Hans-Jörg Blasko in March 2010. Afterward he said he would fight once more this year on either September 21st or October 5th, before stepping back in with Wilder. Then he capped the night with a rousing sing-a-long of Aerosmith’s I Don’t Want to Miss a Thing.

“That was amazing,” said Top Rank supremo Bob Arum, who signed Fury to a nine-figure co-promotional contract in February. “Tyson Fury is a force of nature. This was one of the great shows I’ve ever seen and not just because of the boxing. He’s an entertainer. He is truly unique. Now that he’s in shape, he can knock out every heavyweight in the world. Deontay Wilder is not going five rounds with him. We will have another fight then we will fight Wilder.”

Fury ended Wladimir Klitschko’s decade-long title reign with a dull but effective display in Düsseldorf four years ago, only to surrender all the belts during a 31-month layoff where he underwent a public bout with mental illness and ballooned from 260lbs to nearly 400lbs.

These days the titles belong to Wilder, who’s owned the WBC’s version of the championship since 2015, and Andy Ruiz Jr, who captured the WBA, WBO and IBF title belts with a shocking upset of Anthony Joshua two weeks ago at Madison Square Garden. But one could argue Fury’s claim to the mantle of world’s best heavyweight is purest as the lineal champion: the so-called man who beat the man who beat the man.

He was back in action on Saturday for the first time since December, when he pushed Wilder to the limit in a bid to regain the championship he’d never lost in the ring. Having taken only a pair of tune-up fights against light opposition, Fury boxed Wilder’s ears off but suffered a pair of late knockdowns and settled for a controversial split draw.

Wilder, who is coming off a first-round knockout of fringe contender Dominic Breazeale last month, has since announced his next opponent will be Cuba’s Luis Ortiz in a rematch of their entertaining 2018 scrap. But the American later revealed he’s reached an agreement for a rematch with Fury afterward.

If both Fury and Wilder make it through their fall tests unscathed, the rematch will take place in the first quarter of 2020, most likely in Las Vegas. – Guardian